Robbo Roberts
Editor
posted on 7 months ago — updated on 5 months ago
489
views
Adie Roberts takes a look at the latest offering from Pen & Sword on French Battleships 1922-1956 to see what happened to the French battleships during this time period, also see just how much they changed and were they successful? 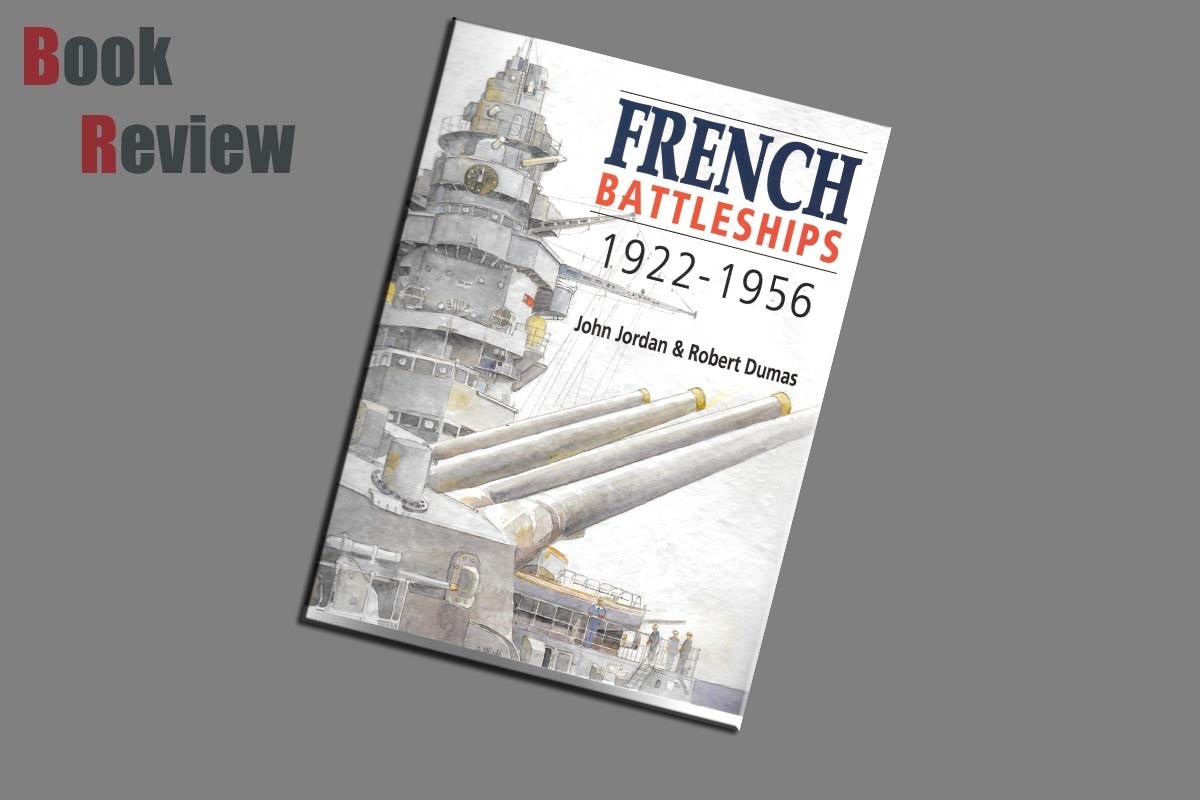 Between 1889 and 1949, the French Navy built a series of pre-dreadnought, dreadnought, and fast battleships, ultimately totalling thirty-four vessels: twenty-three pre-dreadnoughts, seven dreadnoughts, and four fast battleships. Another seven—five dreadnoughts and two fast battleships—were cancelled in various stages of construction (one of which was converted into an aircraft carrier while being built) and seven more were cancelled before work began. The first battleship construction program followed a period of confusion in strategic thinking in France over the optimal shape of the fleet. At the time, the French naval command consisted of competing factions, with one that favoured building fleets of capital ships, continuing the program of traditional ironclad warships that had dominated the fleet in the 1860s and 1870s. The other major faction preferred the Jeune École doctrine, which emphasized the use of cheap torpedo boats to destroy expensive capital ships. During the period, naval construction decisions often depended on the Minister of the Navy in office at the time.

By the mid-1930s, the French again embarked on a naval construction program to counter the German and Italian fleets, resulting in the two Dunkerque-class battleships and four Richelieu-class battleships; of the four Richelieu’s, two were cancelled by the start of World War II, and only one was completed in time to see action during the war. A final design, the Alsace class, was authorized in 1940 after the war began but France's defeat in the Battle of France ended the program. The two Dunkerque’s saw limited action during the war, with Dunkerque being sunk during the British attack on Mers-el-Kébir to prevent her from being seized by the Germans. Bretagne and Provence were also sunk there, and the third member of the class, Lorraine, was seized by the British and turned over to the Free French Naval Forces. Re-floated and returned to Toulon, Dunkerque and Provence were later scuttled there with the former's sister ship Strasbourg when the French intentionally scuttled the fleet to prevent German soldiers from capturing the vessels. Richelieu meanwhile was overhauled in the United States and served with the Free French from 1943. Jean Bart, with only one main battery gun turret operational, briefly engaged United States forces during Operation Torch in November 1942 and was eventually completed in the late 1940s. Both she and Richelieu served as training ships before eventually being decommissioned in 1968.

French battleships are co-authored by John Jordan and Robert Dumas

John Jordan was formerly a teacher of languages in a comprehensive school, and he's fluent in French. He began writing about the post war Soviet Navy in the late 1970s and authored two major books on the subject. Following the collapse of the Soviet Union he turned his attention to the inter war Marine Nationale and produced a series of articles for warship, becoming editor of the annual in 2005. Since 2009 he has co-authored a series of books for Seaforth on the French Navy.

Robert Dumas is likewise a former teacher and worked in primary schools until his retirement in1999. After many years of extensive and detailed research on the French battleships of the interwar period. Robert authored an acclaimed series of French-language monographs for the publisher Marines Editions during the early 1990s and were subsequently reissued as a boxed set in 2001. Robert has co-authored books on the 23.500-tonne battleships of the First World War era Jean Moulin (Marines Editons 2013). A major study of the post-war convoy escorts, Les Escorteurs  Rapides, was published by Lela Presse in 2018. Robert has also produced numerous articles for Warship and Polish magazine Okrety Wojenne.

It was 1910 before France began the construction of her first ‘dreadnought’ battleship when the British laid down the first of these revolutionary vessels in October 1905 the Marine Nationale was about to embark on a new series of battleships armed with twin 305mm (12in) turrets fore and aft and six twin side mounted 240mm (9.4in) turrets.

From 1922 -1931 the designs team of the Service Technique des Constructions Navales (STCN), the constructors branch of the Marine Nationale, were almost fully occupied with designs for the new generation of Cruisers, Flotilla Craft and Submarines.

The design of the Dunkerque and Strasbourg was heavily influenced by the latest British practice. The battleships Nelson and Rodney,  scaled down versions of the G3 Battle cruiser design of 1922, entered service in August and November 1927 respectively and had a major impact on the thinking of other navies. They introduced a number of revolutionary design features: an all forward main armament with the machinery aft, a secondary battery in trainable twin turrets above the weather deck, a tower structure to carry the main fire control directors.

Many of the key features of the Nelson design were focused on securing complete protection for the magazines and machinery. In particular, the length of the armoured citadel was reduced to a minimum in order to maximise armour thickness: this ran counter to accepted practice in other navies, notably the US Navy, which saw the armoured belt as a protector not only of the ship’s vitals but also its buoyancy and stability.

The layout adopted by the Dunkerque freed up the stern for comprehensive aviation facilities which included a trainable 22-metre catapult and a two-tier hangar on the centre line served by a lift. Three long-range reconnaissance aircraft could be carried,which was a particularly valuable resource when the ships were hunting down enemy commerce raiders. By locating the big guns forward and the aircraft facilities on the quarterdeck, the risk of blast damage was eliminated, and the arrangement also had the advantage of placing the aircraft and the hangar close  to the volatile aviation fuel, which in accordance with customary French practice was stowed in tanks isolated from the hull structure in the upper part of the stern.

Dunkerque was laid down at the Arsenal de Brest in December 1932 the main body of the hull was built in the Le Salou No. 4 dock the only large building facility available in the dockyard. Even so, when launched on the 2nd of October 1935 she was missing the first 17 metres of her bow, this was subsequently fitted in in one of the 250-metre laninon graving docks. She was then towed to the fitting out quay for completion commissioning in December of the following year. Trials and work-up of this new and complex ship would take a further twenty months.Dunkerque would finally enter service with the Atlantic Squadron on the 1stof September 1938.

Operation “posthorn” the winter of 1943-4 was a frustrating time for the captain and crew of the Richelieu.The ship was swinging at anchor in Scapa Flow when the German battleship Scharnhorst was engaged and sunk by Duke of York. The bitter weather conditions and spartan recreational facilities available in this remote anchorage did little to raise French morale.

The operation of note that the Richelieu was involved in at this point was Operation “Posthorn” which took place during the 10-12th of February 1944. Richelieu followed the battleship Anson, flying the flag of force commander, Vice-Admiral Henry Moore (second in command, Home Fleet), and the carrier Furious out of Scapa Flow, with the Orkney and Shetland Islands to starboard, NNE into increasingly heavy seas. The objective was to attack German shipping in the Stadlandet area of Northern Norway, hopefully provoking a reaction on the part of the heavy German cruisers that were known to be in the area. Ten Barracuda bombers escorted by ten Seafire fighters, duly took of from the Furious at dawn on the 11th of February returning in the late morning. Once all of the aircraft were safely on board, the Allied force withdrew to the Southwest at 18 knots. The results of the operation were frankly disappointing :a cargo ship of 3000 tonnes sunk by three bombs, a repair ship damaged and a single Me 109 fighter shot down at a cost of one Seafire.

There is so much detail and a few French Battleships that I could have carried high-lighting important information about each one but trust me this review would be so large and long and would take me more months than I can imagine. So, what do you have in this 232-pages of back book chapters, that cover the battleships Dunkerque, Strasbourg,Richelieu, Jean Bart, Clemanceau, and Gascogne, the book has historical information, design, the locations of the builds, black and white photographs, colour profile plates plus information of locations of battles that they fought in.? If I had to describe this book in one word “magnifique”

Would I recommend this fascinating book about these French battleships it would be a resounding yes, for anyone that has an interest in Naval History, French Battleships individually or as a whole,to the modellers looking for a diorama idea, or taking a look at the colour plates for accurate colouring of your own battleship this has to be the book for you