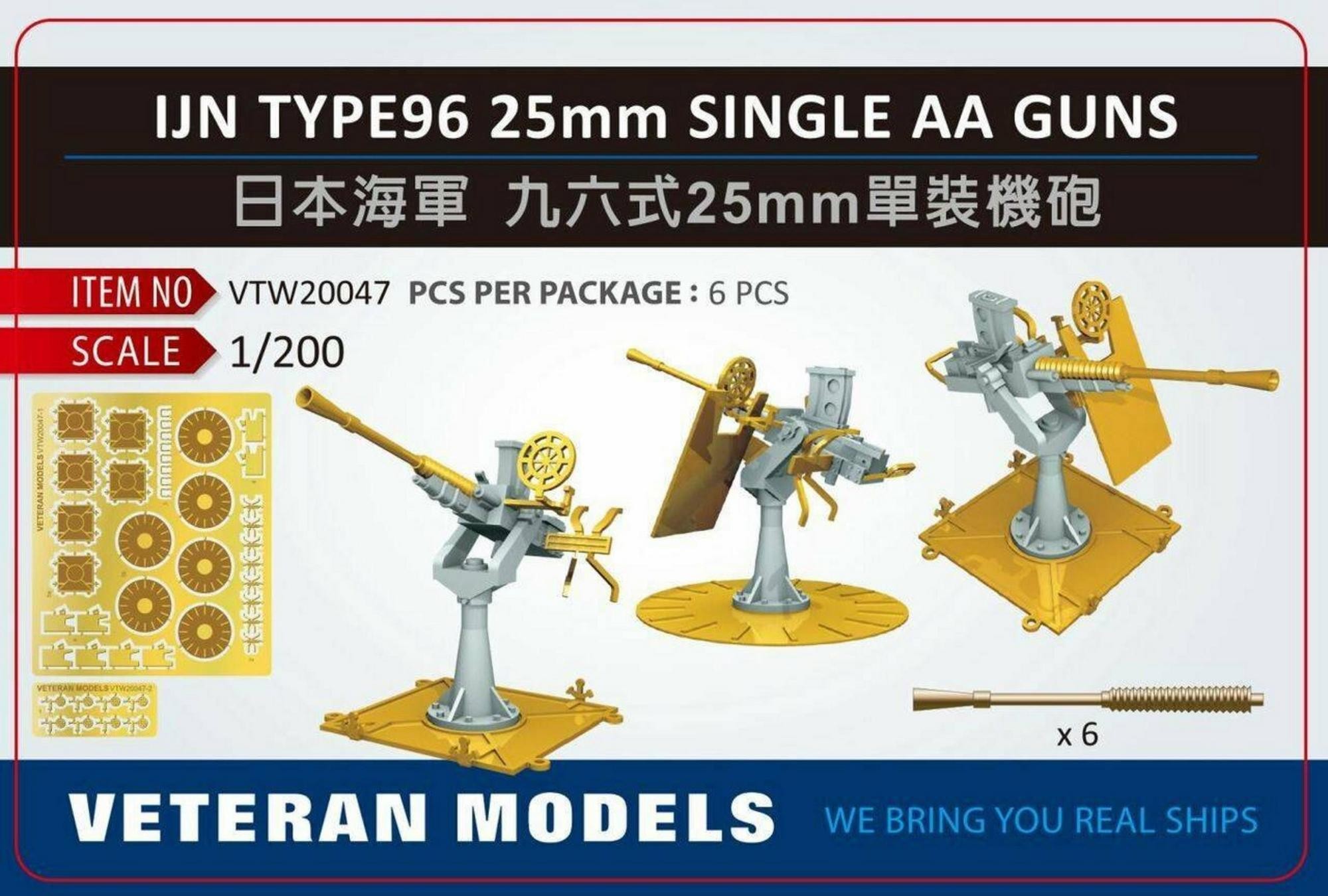 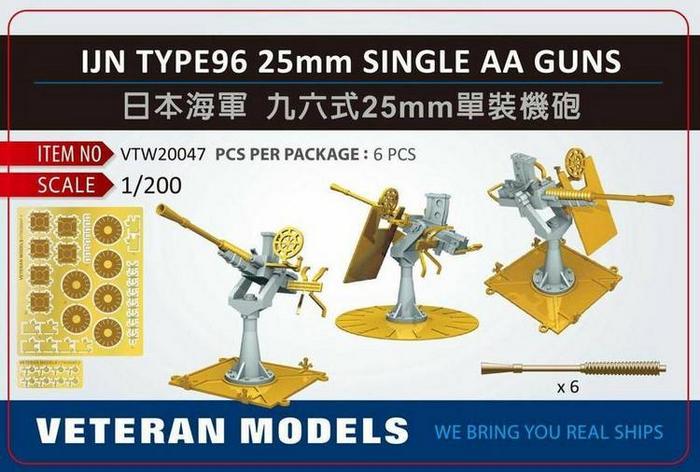 The Type 96 was the standard medium anti-aircraft gun of the Imperial Navy throughout World War II. A mediocre weapon compared to its contemporaries in other navies, it was nevertheless a mainstay of IJN antiaircraft defense, being mounted aboard practically every ship in the fleet. The Type 96 25mm machine guns represent Veteran Models’ first venture into the weapons of the Imperial Japanese Navy in 1/200 scale, but they have announced that there will be more to come!

These 25mm AA guns are little kits in themselves with superb resin, photoetch brass, and turned brass parts. The intricate assemblies represent an order of magnitude improvement over the parts provided in traditional paper or injection molded plastic kits. Paper 1/200 scale kits which mount various iterations of the Type 96 include numerous models by GPM, Angraf, Answer, Halinski, and others. Injection plastic kits include Nichimo’s 1/200destroyers IJN Akizuki, Hatsuzuki, Kagero, Shiranui, the submarine I-19, and the battleship Yamato. 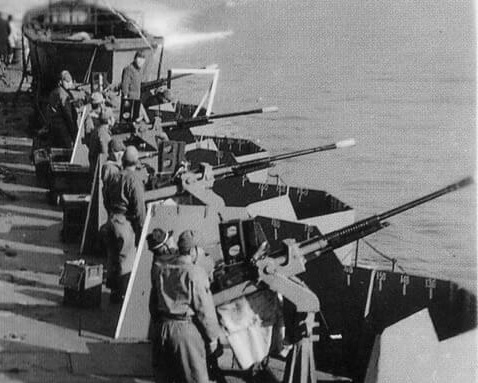 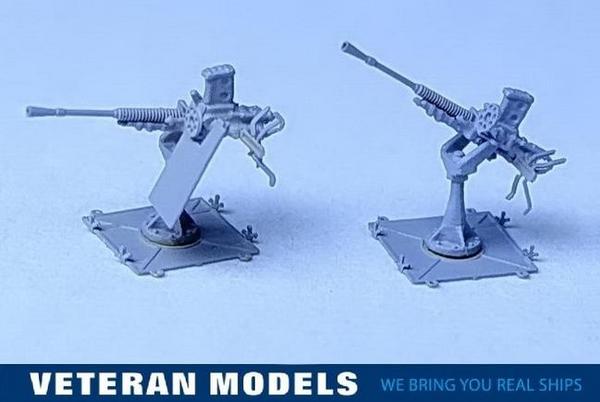 Even before looking at the model parts, a standout aspect of Veteran Models has always been their well-prepared instruction sheets. 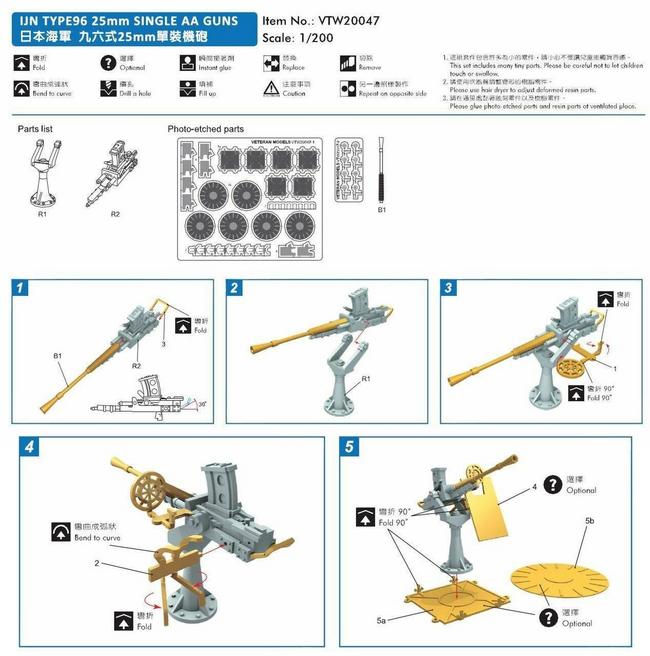 Many aftermarket producers seem to regard the instructions as an afterthought, but Veteran gives them the same level of care as the actual model parts. This one is no exception with detailed color renderings clearly showing all the parts and exactly where everything should go. Kudos to Peter Chen, Veteran’s graphic designer! 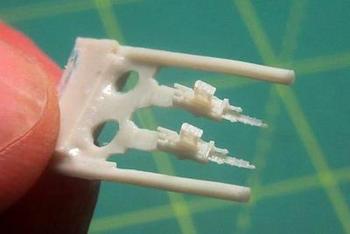 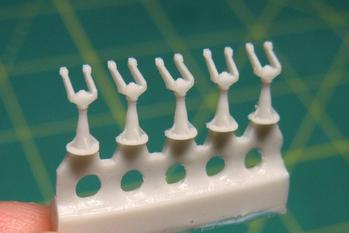 As for the parts themselves... beginning with the gun bodies and mounts, the resin components are tiny but nearly perfectly produced. Almost no cleanup is required, and as usual, the level of detail is incredible! 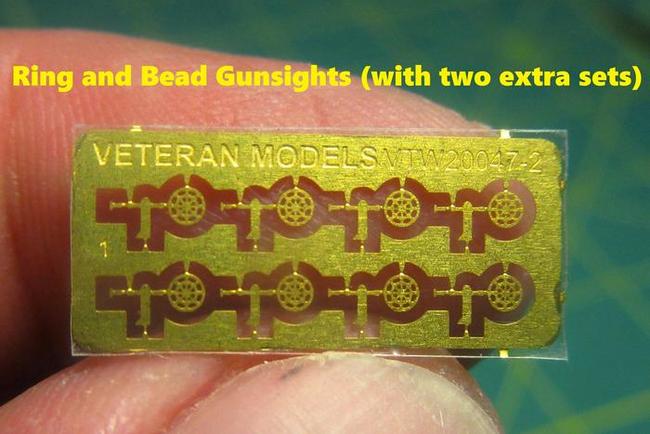 The petite ring and bead gunsights for the guns are provided as etched brass to parts to be bent and twisted into shape. This process should be straightforward, but I appreciate that Veteran has provided spare sights just in case. 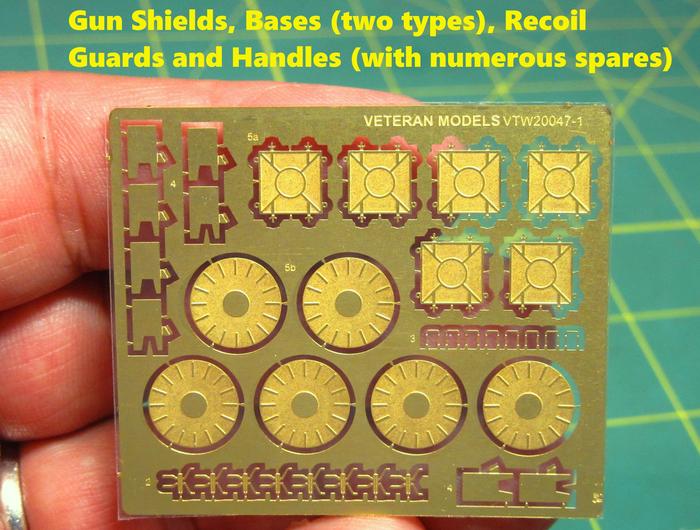 A more comprehensive photoetched brass sheet includes the optional gun shields, two types of bases, and other fittings. Again, extra parts are provided (two spares each for the shields, recoil guards, and shoulder braces/handles) – which is nice, since all of these parts will also require a certain amount of bending/twisting before attachment. 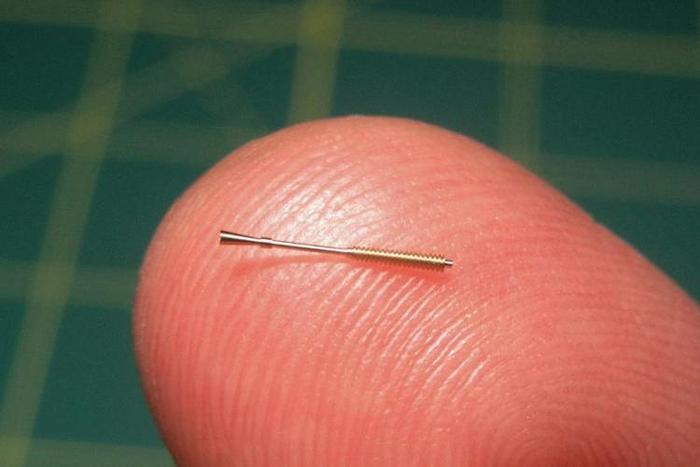 Finally, there are the 25mm gun barrels. These extraordinarily sharp three-dimensional brass parts feature open muzzles, delicate flash suppressors, and the finest ribbed heat-dissipating rings that I have ever seen. 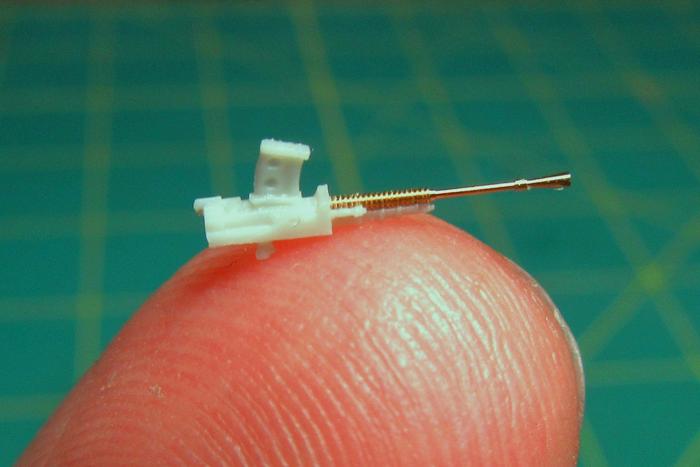 The first assembly step is to add the brass barrel to the resin gun. This is crucial to get just right, as a barrel mounted out of kilter with the gun would be quite noticeable. Fortunately, the fit is perfect. 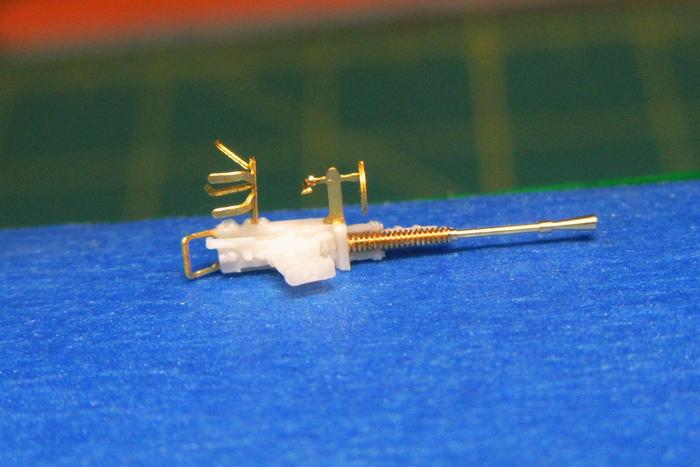 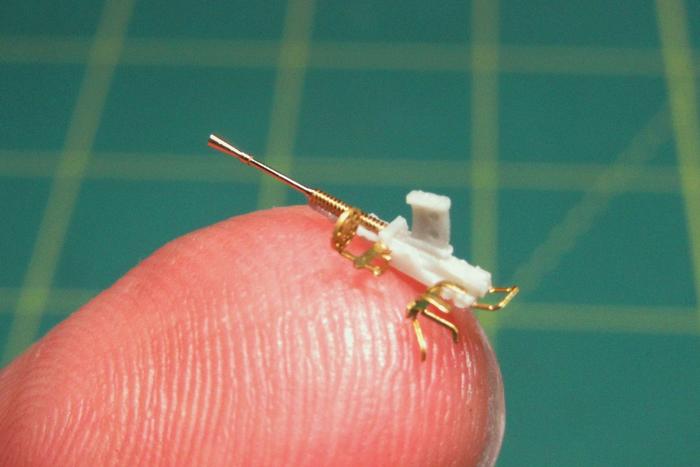 Veteran would have you attach the gun to the mount at this point, but fitting the subsequent recoil guard, shoulder braces/handles and ring and bead sight would be difficult to accomplish with the gun perched on the fragile mount. Instead, I lightly attached the gun assembly sideways to a piece of tape on a small box to stabilize it and then added these details. 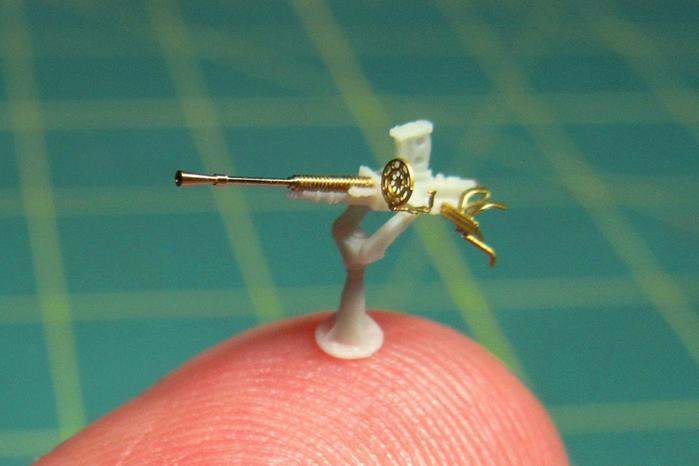 Finally, the finished gun assembly is attached to the resin mount. The fit is so good here that it just snaps into place, which is great as this will allow the gun’s elevation to be adjusted later after attachment to the ship.

Having completed the first gun, I set about assembling the other five in the set. 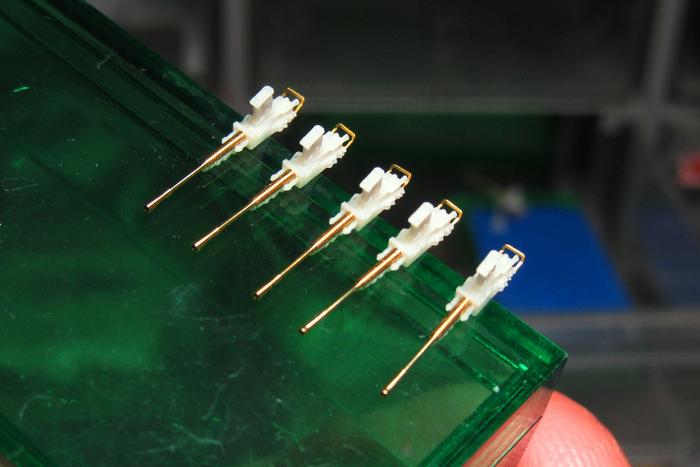 As before, I revised the assembly sequence to begin with attaching the brass gun tubes and etched recoil guards to the gun bodies. 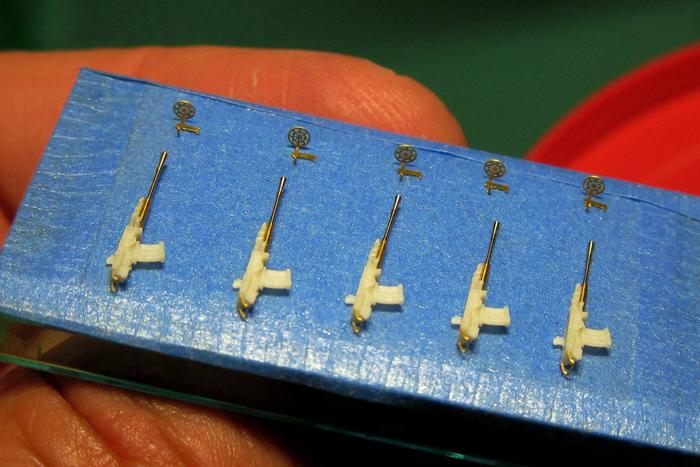 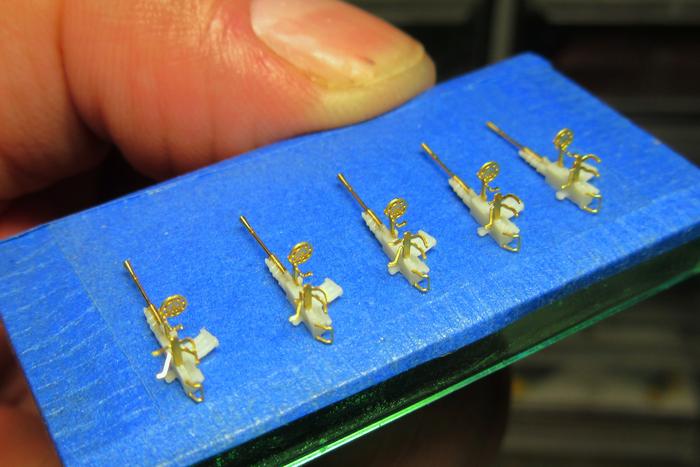 Temporarily attached to a box with tape, the guns were outfitted with their sights and handles/shoulder braces. This is the most challenging part of these little builds since each of the etched brass parts must be precisely bent and twisted in multiple directions before mounting. Also, in place they must be accurately oriented with both the gun and with each other. Building the guns production style like this helps ensure consistency, and it is also useful in limiting damage from handling. 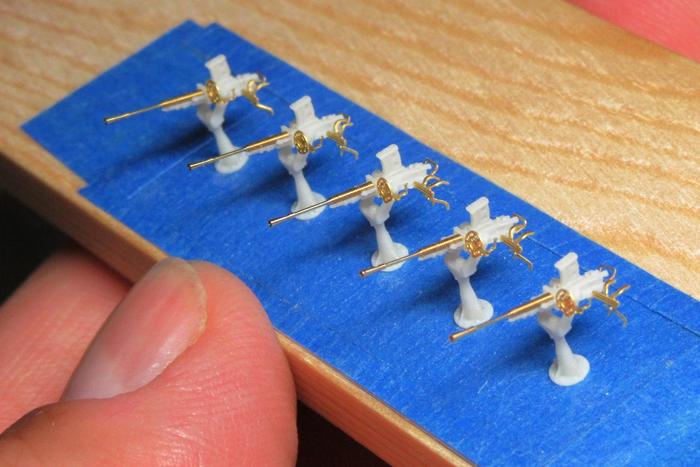 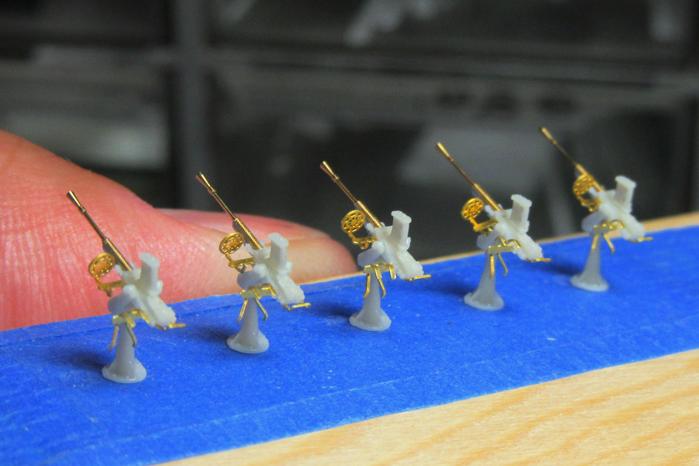 The assembled guns were then set on their mounts. 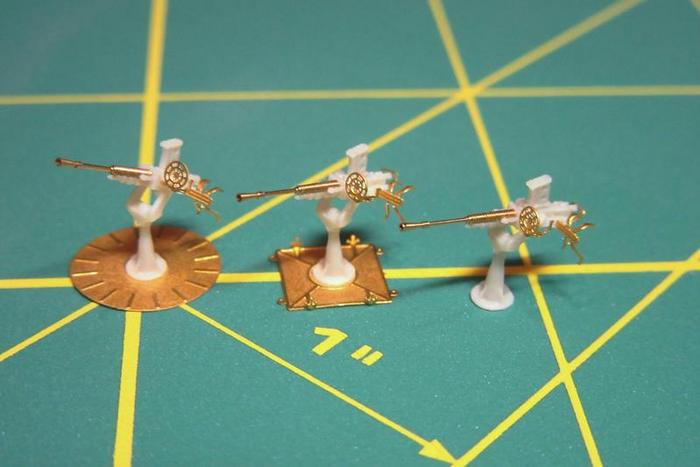 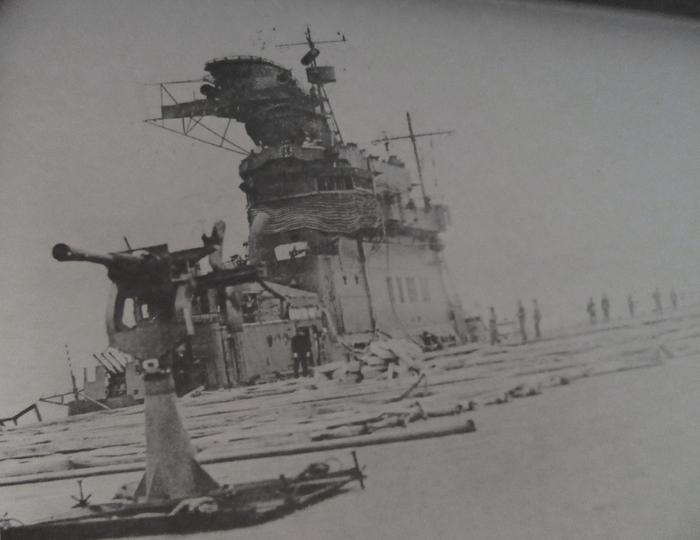 Veteran Models also thoughtfully provided two types of bases for the guns: a circular pad with non-slip ridges for steel decks, and a square detachable type used to go on planked areas of aircraft carriers and battleships. Nice! 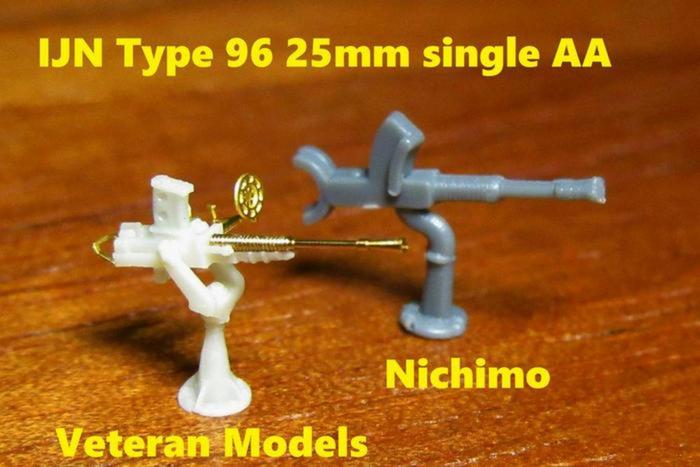 These absolutely stunning weapons are typical examples of Veteran Models proprietor Melvin Tung’s absolute commitment to precision scale detailing. While the extraordinarily tiny and delicate parts can make these 25mm singles challenging upgrades to accomplish, the results definitely repay the effort. In short, this is another winner from Veteran Models!