JPTRR
Editor
posted on 1 month ago — updated on 1 month ago
358
views
GERMAN AND ITALIAN AIRCRAFT CARRIERS OF WORLD WAR II from OSPREY PUBLISHING is an exploration of Axis attempts to create a seaborne air arm. 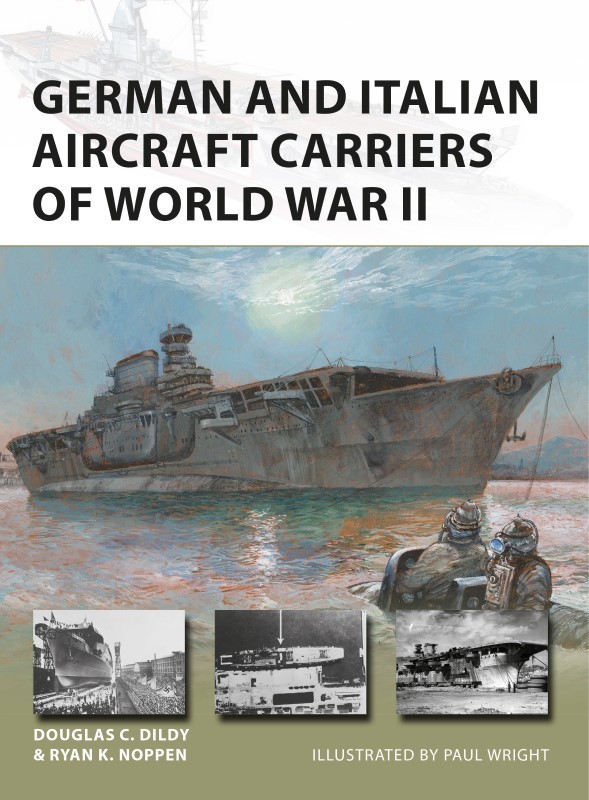 German and Italian Aircraft Carriers of World War II is the 306th title in Osprey Publishing LTD’s series New Vanguard.  New Vanguard books are intended as a resource for model makers, wargamers, and military history enthusiasts, and  feature exploded and cutaway diagrams, and illustrated with photographs and diagrams.  This 48-page paperback book is authored by Ryan K. Noppen and Douglas C. Dildy, and illustrated by Paul Wright.  It is catalogued with Osprey’s short code NVG 306, and ISBN 9781472846761.  It is also available in PDF and ePUB formates (with different ISBNs).

You can view the book on Osprey's website, here.

While Nazi Germany’s aircraft carrier Graf Zeppelin is fairly well known with hundreds of pages written about it, new research or different study objectives often reveal new aspects of he vessel; the intended aircraft are explored as well.  Messers. Noppen and Dildy also examine pre-war German seaborne aviation experiments.  Italy’s attempt to build an aircraft carrier was unknown to be before this book and that made this an exciting subject.

This fully illustrated study details Germany and Italy's failed development of World War II aircraft carriers, and the naval aviation ships that the two Axis powers sent into action in their place.

The quest for a modern aircraft carrier was the ultimate symbol of the Axis powers' challenge to Allied naval might, but fully-fledged carriers proved either too difficult, expensive or politically unpopular for either to make operational. After the Anglo-German Naval Agreement of 1935, Hitler publicly stated his intention to build an aircraft carrier, the Graf Zeppelin, which was launched in 1938. A year later, the ambitious fleet-expansion Z-Plan, was unveiled with two additional aircraft carriers earmarked for production . However, by the beginning of World War II, Graf Zeppelin was not yet completed and work was halted. Further aircraft carrier designs and conversion projects such as the ocean liner Europa and heavy cruiser Seydlitz were considered but, in January 1943, all construction work on surface vessels ceased and naval resources were diverted to the U-boat Campaign.

This book explains not only the history of Germany's famous Graf Zeppelin fleet carrier and German carrier conversion projects but also Italy's belated attempt to convert two of her ocean liners into carriers. It considers the role of naval aviation in the two countries' rearmament programmes and describes how ultimately it was only Italian seaplane carriers and German ocean-going, catapult-equipped flying boat carriers that both Axis powers did eventually send into combat.

Modelers and historians will find this an amazing and inspirational subject.

Within the New Vanguard standard of 64 pages from title page though the index, German and Italian Aircraft Carriers of World War II presents an appreciable amount of information is presented through two chapters:

* Experimentation in the First World War

That list of contents from my book is slightly different than the contents shown on Osprey’s webpage.  (Not unusual.)

Considering the lack of wartime exploits of the subjects, the authors created an interesting and informational book as you just read in the contents above.  German and Italian efforts are told under separate chapters.

Our subject starts with a basic review of seaborne aviation in the Great War, followed by sub-chapters: German seaplane carriers, 1914-1918; German aircraft carrier project SMS Ausonia, 1918; Experimentation in the First World War; Interwar projects.  Those present a history of the aircraft carrier (CV) I did not know.  Like the UK,US and Japan in the Second World War, the Axis navies tried keel-up designs or turned to existing hulls - cruisers or fast commercial ships - for their initial attempts to deploy a CV.  Flush-deck aircraft carriers and Plan Z explain the successes and disappointments that led Germany to design their ultimate Graf Zeppelin-class aircraft carriers.  Italy’s projects were the Aquila, Sparviero and Bolzano.

The text includes facts such as the ship builders and other contractors involved in designing and constructing the ships.  Launch dates and other key events are noted.  Data tables and illustrations accompany the text. Germany sought technical information from navies with CVs and such is covered.

The author presents technical details about the ships and their gear:

As the war progressed, the fate of each ship and its equipment is recounted, i.e., antiship and antiaircraft guns redeployed.  At times work on some vessels was suspended to make room in naval construction yards to repair combat-damaged ships.  Excluding air attacks, some of the ships were involved in combat of a sort, being attacked by special forces or commandeered to be used as a blockship.

The aircraft intended to deploy with the CVs receive similar attention.  Fiesler’s Fi 167A multi-role STOL design is particularly interesting, as is the Messerschmitt Me 155.  Italy selected the land-based Reggiane Re.2001 Falco II for navalization.  Aircraft serials are recounted when known, as is special equipment used in the aircraft.  Combat histories are also presented.

I find that text interesting and useful as a modeler and historian.

Modelers, historians and artists will find a useful gallery of photographs reinforcing the text, including a rare view of an Axis CV ‘in combat’ - the ship moored as seen from a bomber during an air raid.  Most of the images of the ships show them in the yards or moored along their pier.  Images of their aircraft are useful for modelers.  You may have seen these images before but most are new to me; one of the more interesting photos is of Aquila under camouflage netting.  All photos are black-and-white with the exception of some colorized postcard reproductions, and the 2006 underwater discovery of the Graf Zeppelin.

Original artwork by artist Paul Wright fills in views and scenes that the camera missed.   Each illustration is narrated with explanations and data.

3. Action scene: RAF aerial bombardment of Graf Zeppelin on the night of August 27-28, 1942 illustrates defending the carrier from an air raid.

Technical characteristics of each ship and aircraft are summarized with tables.  Some of the tables, when listing armament, include rate of fire, elevation and range of weapons.

This visual aspect of this book effectively supports the text. 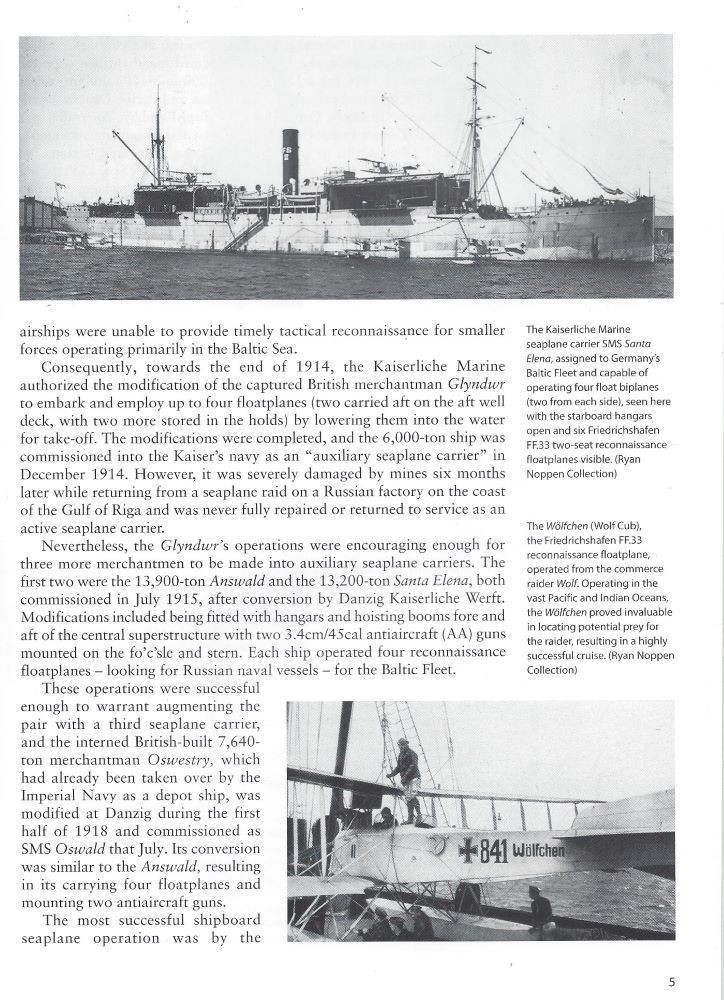 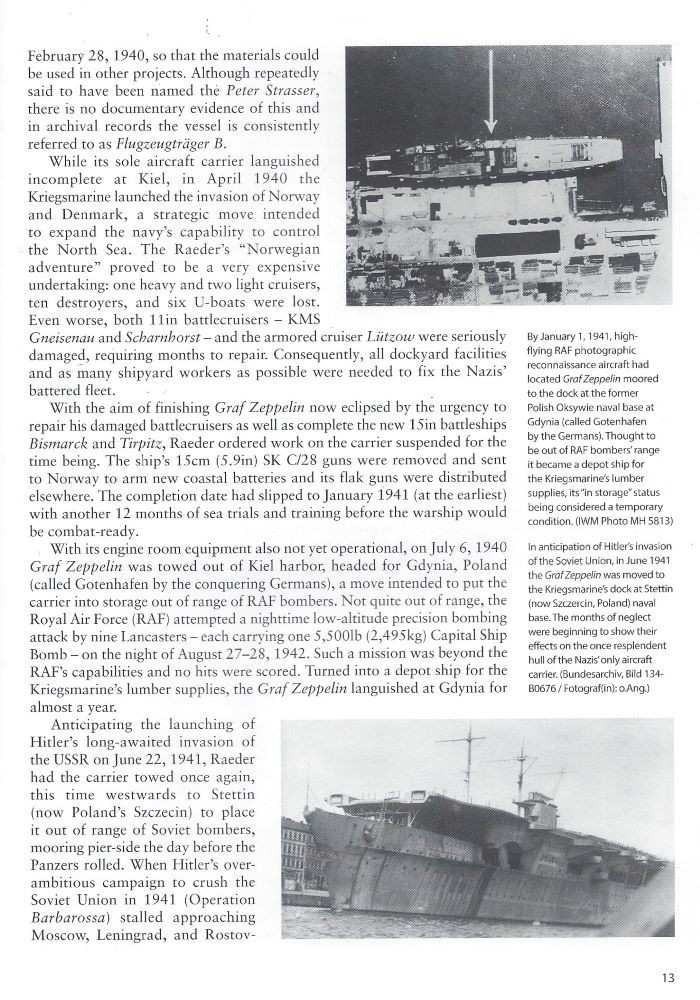 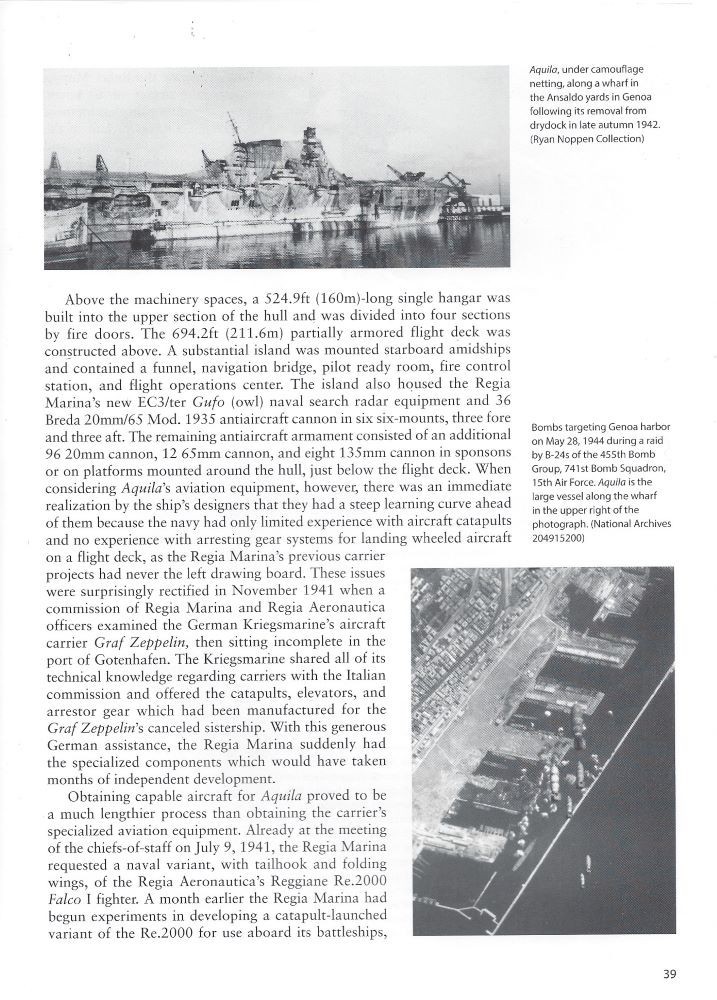 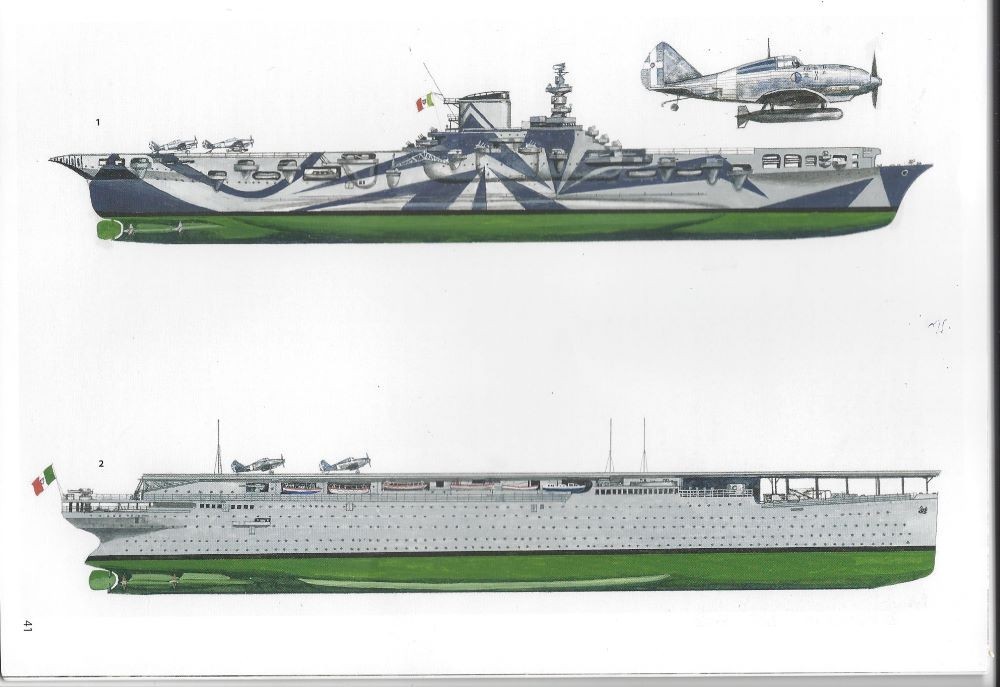 Strengthening my knowledge of WW2 Axis naval power, German and Italian Aircraft Carriers of World War II is another enjoyable title in Osprey's series New Vanguard.    It presents useful scholarly material and technical details.  Modelers, historians and enthusiasts of aircraft carriers, and navies of Nazi Germany and Fascist Italy should find this book to be concise, useful and unique.  Modelers may find source material and inspiration for their Axis aircraft carrier subjects.  A useful gallery of photographs and artwork provide support to the text.

Relatively small though the book may be, I find it an interesting history of obscure Axis naval programs. It has a home on my reference shelf and its pages will become more dogeared as I build my Graf Zeppelin.  Recommended.

Please remember to mention to retailers and Osprey that you saw this book here - on Model Shipwrights.