TimReynaga
Editor
posted on 2 years ago — updated on 4 days ago
2,804
views
Round 2 (i.e., Lindberg) has announced the reissue of Pyro’s classic Niña, Pinta & Santa María kits as a “Ships of Columbus” set. 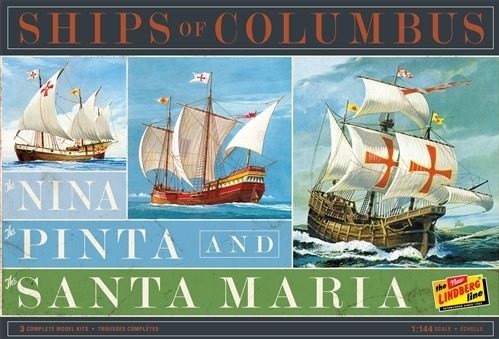 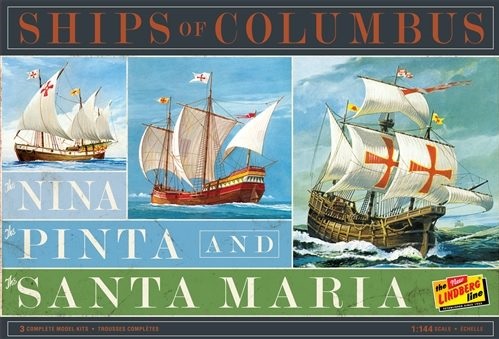 Numbers 11 & 12 of Pyro's "Antique Ship" series, the Niña and Pinta retailed for the princely sum of 60 cents each when they were first issued back in 1966! Designed for younger modelers, these sailing ships featured simple, fast construction and a minimum of parts. They were later issued by Life-Like and by Lindberg. The hulls measure 5 3/4 inches in length, scaling the ships at about 1/150.

Despite their simplicity, the models appear generally to match what little is known about 15th Century caravels. The bows at the foredecks should probably rake upwards a little more, but they aren't too far off published sources. Masts, though simplified, are basically accurate. Niña ("Little Girl") is depicted as lateen rigged rather than square rigged as she appeared during her transatlantic trip under Columbus (although the rig is correct for the first leg of the voyage). Pinta is square rigged. The billowing sails are molded integrally with the spars, but they look surprisingly good. Some smaller parts such as the launch and lombard cannons are rather nicely done as well (although the gun mounts shouldn't be wheeled). Unfortunately the surface detailing throughout these kits is quite heavy, especially the raised wood grain. They build quickly into pleasing but somewhat toylike models.

This one is a reissue of Pyro's Santa María kit #171, which first appeared in the 1950s. Life-Like produced the kit from 1972 until they folded in 1978, when Lindberg acquired the molds. Lindberg has issued it on and off since then, sometimes along with the Niña and Pinta kits. These sets include the "Great Moments in History" (kit 72212) and the "Columbus Discovers America Diorama; Niña, Pinta, Santa María" with a seascape, acrylic paints, and paintbrush (kit 70860). The latter was released in 1991 to commemorate the 500th Anniversary of the Discovery.

Despite being often sold with the ex-Pyro Niña and Pinta, this kit doesn’t really scale with them; the estimated 100 ton Santa María hull should be noticeably larger than the 60-70 ton Pinta and the 50-60 ton Niña. Instead, the models are all about the same size (to fit into the standard kit boxes of the time.) Also, while the 1966 Niña and Pinta were clearly made by the same design team, Pyro’s earlier 1950s Santa Maria is a bit more primitive with slightly mushier detail and some evident inaccuracies. The masts, for example, seem too tall, the inner gunwales show no detail, and Admiral's cabin has no windows facing aft. Also, the molded billowing sails aren't quite as convincingly executed as on the later efforts. Still, the model appears generally to match what is known about 15th Century nao-type ships, and it does fit with the look of the other ex-Pyro Columbus ships. The hull measures 5 3/4 inches in length, scaling the ship at somewhere between 1/150 and 1/200 depending on how one calculates the original hull length. As with all Pyro's sailing ships, this one was clearly designed with younger modelers in mind, featuring simple, fast construction and a minimum of parts. The billowing sails, molded integrally with the spars, look reasonably good. There are even little holes in them to attach rigging. Some smaller parts such as the launch, anchors, and cannon are passably done as well, although as with the Niña and Pinta kits, the lombard gun mounts shouldn't have wheels. Surface detailing throughout, seemingly geared to heavy-handed brush painters, is very heavy - especially the planking and raised wood grain. It builds quickly and would be a great starter kit for kids, but perhaps it would not be the best basis for a more serious replica.

The new Ships of Columbus: Niña, Pinta & Santa María issue by Round 2 features the same plastic as before along with the classic box art from the original Pyro releases.

The real difference is the inclusion of a new decal sheet printed by Cartograf. The sheet consists of red crosses for the sails, ship names for the base plates, and, most usefully, markings for the flags and banners. While these are colorful and easy to apply, they are not entirely correct. The more compulsive among us will note that flags #3, #8, and #15 (the green “F Y” expedition flags) are correct, but flag 9 (the small red cross) for the Pinta should actually be a smaller version of Santa María’s Castilla y León banner #14. Also, the expedition swallowtails (decals #10 and #17) should have the castle (for “Castilla”) and lion (for “León”) in the red and white quadrants as on Santa María’s #14… but these are really just quibbles. I painted the flags on the examples pictured below (built from the old Pyro releases before the decals), but  now modelers will be spared having to paint them!

They aren’t perfect, but it is great to see these classic little kits readily available again. Kudos to Round 2 not only for reissuing them, but for adding value with the new decal sheet as well! 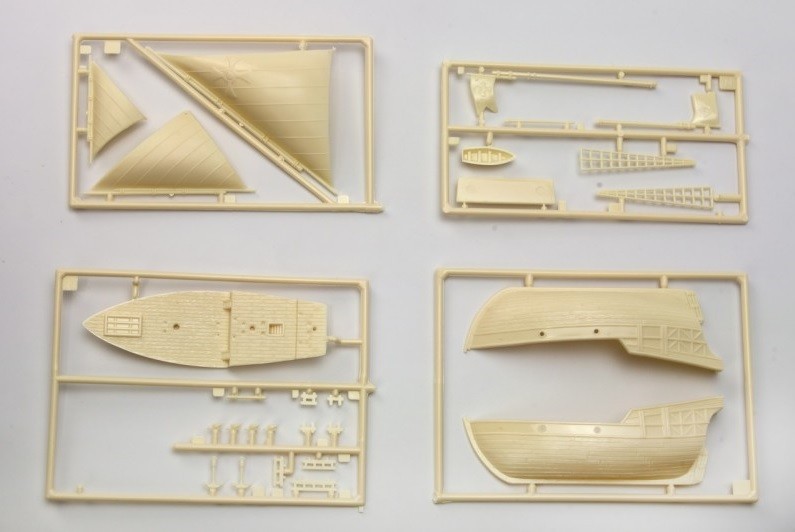 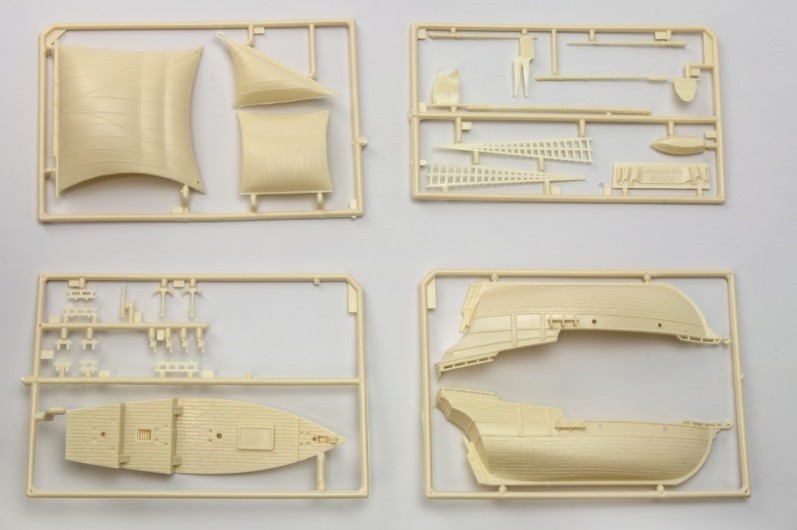 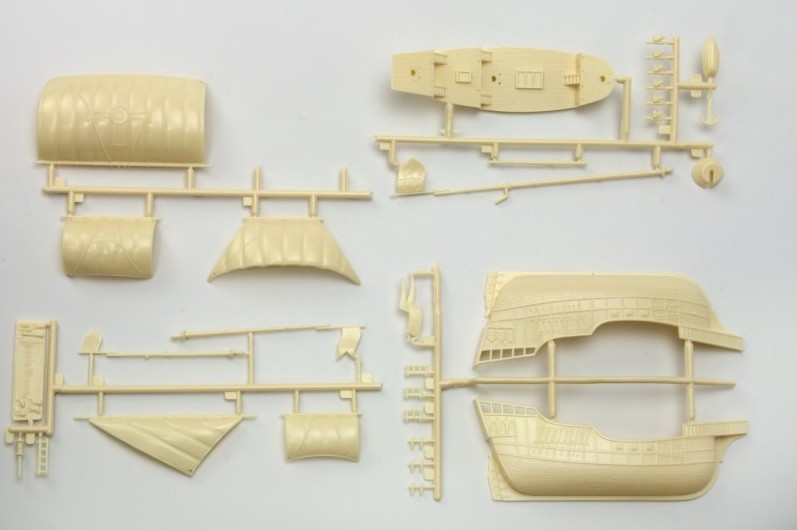 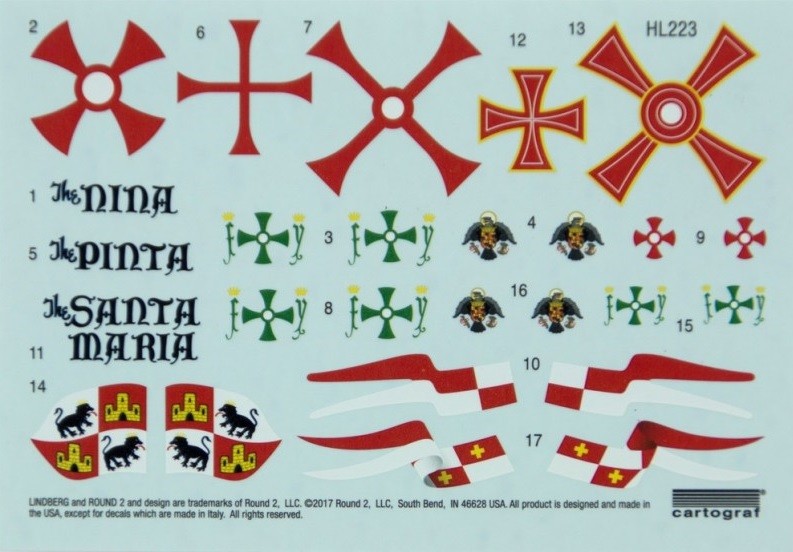 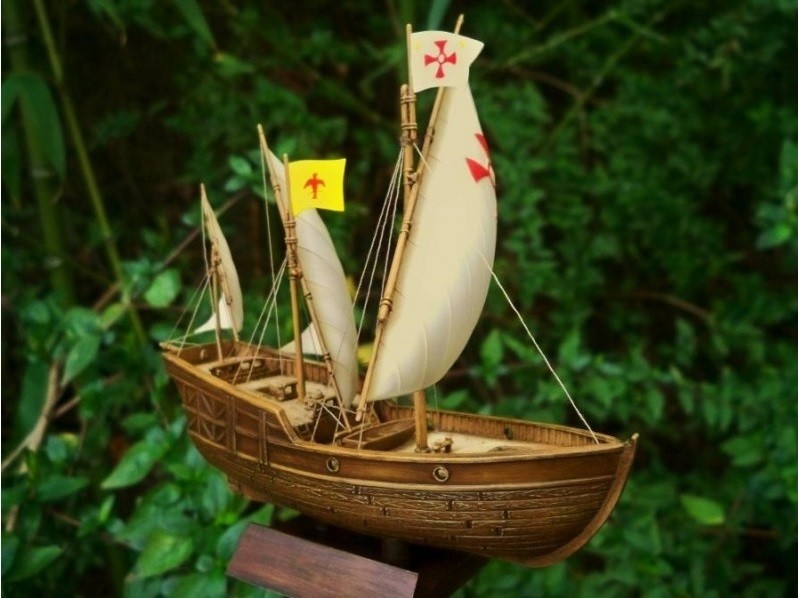 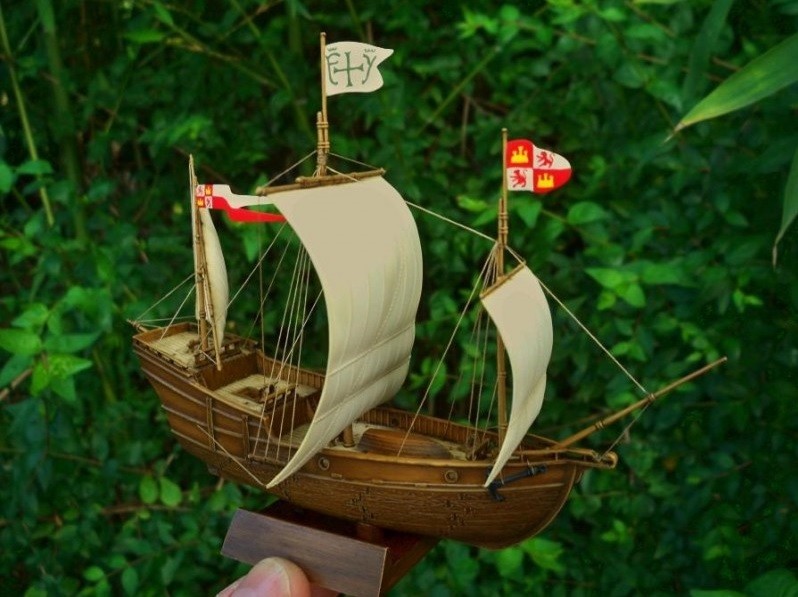 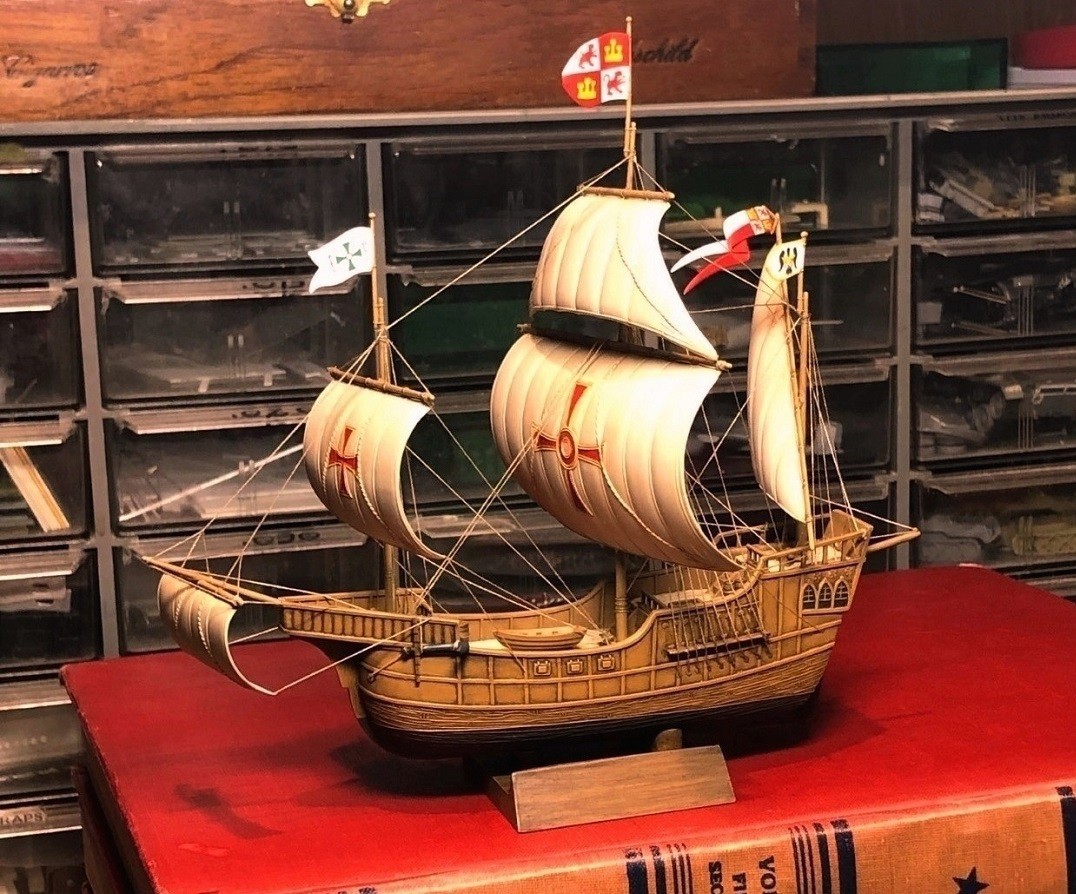