JPTRR
Editor
posted on 1 year ago — updated on 1 year ago
2,273
views
This is a review of a new New Vanguard book from Osprey Publishing. It presents the history of the Royal Netherlands Navy of World War II. 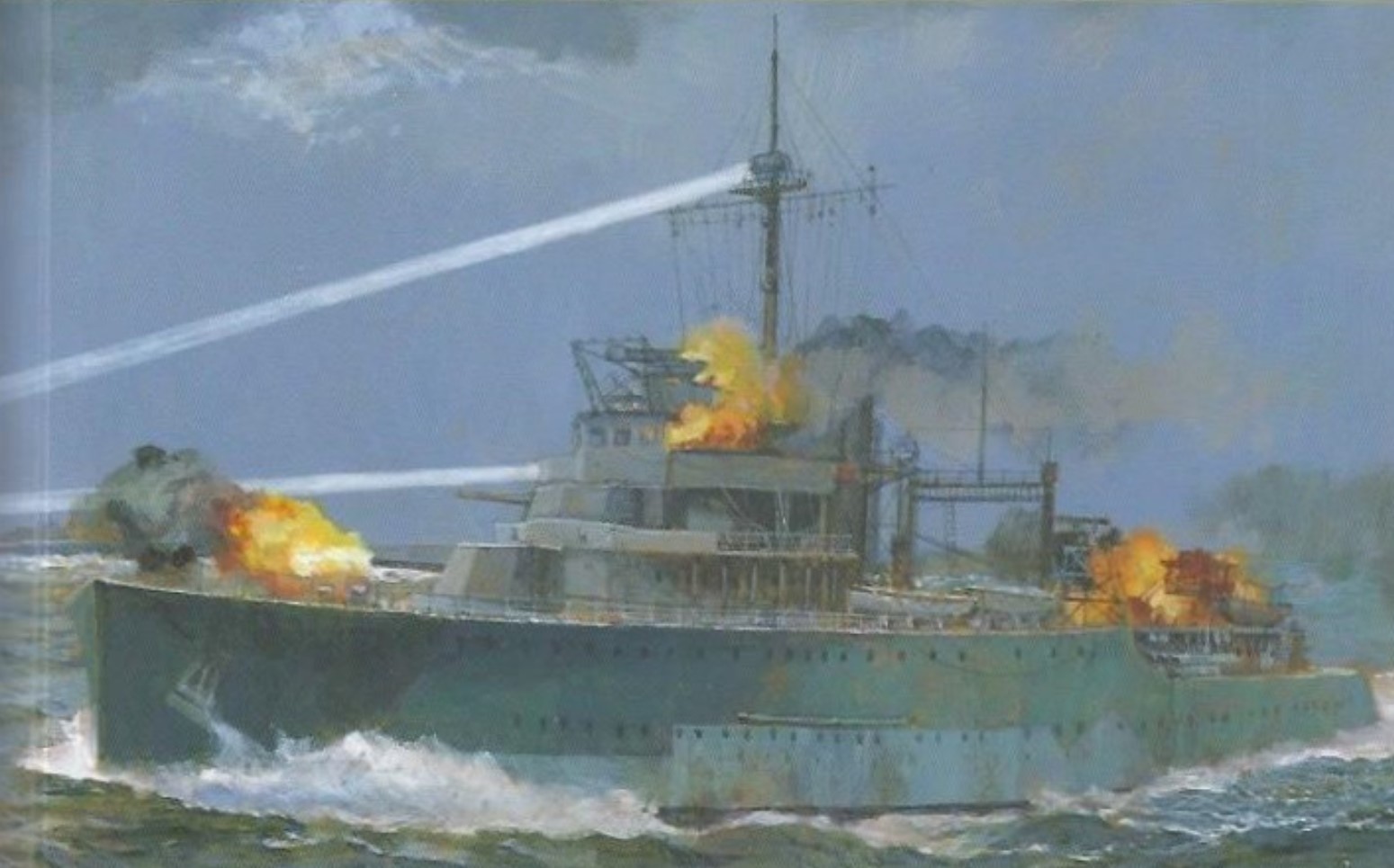 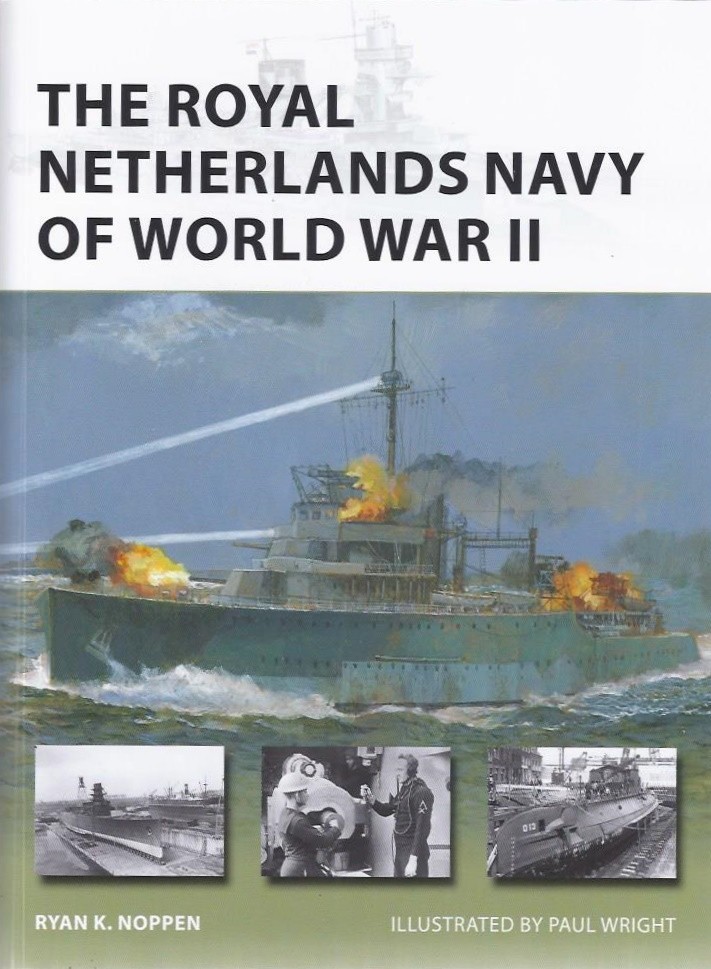 Holland was a dominate naval and economic power for centuries, mainly due to her maritime trade.  Before storm clouds of World War Two gathered, in 1930 the Netherlands GDP per capita was the highest in Europe, and second only to America.  The Dutch colonies in the Pacific fueled their economy.  The Dutch navy was designed and built to defend the Dutch East Indies, and yet less than three months after the Pacific war began, few Dutch major ships were above the waves anywhere in the world.  What happened?

The Royal Netherlands Navy of World War II is a new book from Osprey Publishing LTD, the 285th title of the New Vanguard series.  Authored by Ryan K. Noppen and illustrated by Paul Wright, this 48-page softcover book is catalogued as ISBN 9781472841919 and with Osprey's Short code NVG 285.  It is also available in PDF and ePUB formats.

Osprey's description of this book is:

In the late 19th and early 20th century, a combination of coastal defence for the homeland and fleet defence for the East Indies became the established naval strategy for the Royal Dutch Navy and set the template for the world wars. Battleships were too expensive to build and maintain, so after World War I, there was significant investment in submarine development and construction. A handful of modern light cruisers and a new class of destroyers were also constructed during the interwar years to serve as a small Fleet-in-Being in the East Indies, as well as to support the actions of the navy's submarines. The light cruiser HNLMS De Ruyter and the Java-class light cruisers were the most powerful units of the new fleet whilst the backbone of the destroyer fleet was the Admiralen-class and the Tromp-class of destroyer leaders.

Beginning in December 1941, the Dutch Navy played a very active role in the defence of the East Indies against the Japanese during World War II. The Battle of the Java Sea at the end of February 1942 crushed Dutch naval power in the East Indies, sinking the cruisers Java and De Ruyter and killing Admiral Karel Doorman. However, several Dutch surface warships and submarines continued the fight against the Axis powers alongside the Allies until the end of World War II, including a pair of British-built destroyers, Van Galen and Tjerk Hiddes. This beautifully illustrated book from a leading scholar on Dutch military history provides a comprehensive guide to the Royal Netherlands Navy of the World War II period, complete with detailed cutaways and battleplates of the fleet in action.

The Koninklijke Marine (Royal Netherlands Navy, or RNN) is an interest of mine as my father fought along side them on USS Houston.  (See the Osprey book Java Sea 1942 Japan's conquest of the Netherlands East Indies, linked above.)  Now I have a better understanding of what happened.

SUBMARINES OF THE KONINKLIJKE MARINE

RISK THEORY AND ITS IMPACT ON THE OPERATIONS OF

Introduction lays out the historical background of Holland's philosophy that led to their navy of WWII, e.g., relying on other navies so the Netherlands could get by on the cheap.  Within economic and population realities, RNN had plans for super-dreadnoughts and other capital ships, but the First World War got in the way.  After the war, with severe economic stress, the Dutch government set up front companies to circumvent the Treaty of Versailles and use German companies to build components, but they could also be tightfisted with funding, which stymied building and launching new ships.  Indeed, the two Java-class cruisers languished 10 years from laying of their keels to commissioning.

Major Surface Vessels of the Koninklijke Marine devotes almost half of the book describing RNN ships, political debates, military strategy shifts, and financial hardships.  Each class is described in concise detail.  Some RNN ships featured advanced or unique systems that rivaled or exceeded those of major naval powers.  One of those systems was an automatic fire control system.  Admiralen-class destroyers were equipped to handle floatplanes for scouting.  This is a very interesting chapter.  Submarines of the Koninklijke Marine discusses the strategy of relying on the submarine as the primary weapon to deter attacks on Holland's shores and colonies.  The Netherlands created overseas authorities for their colonies and those entities actually funded vessels apart from the Dutch government.   More than the technical and operational aspects of the submarines and their classes are discussed.  It recounts the common thread that the Netherlands House of Representatives (Tweede Kamer) lost interest in what little funding they had provided, and the RNN starved.  What few subs Koninklijke Marine commissioned, some benefited from advanced technology gleaned from British and German subs interned during The Great War, and the Netherlands' secret German military facilities.

A quarter of the content presents Risk Theory and Its Impact on the Operations of the Koninklijke Marine Warships, 1941-42. Risk Theory was RNN's adoption of Risikogedanke, German Admiral von Tirpiz's theory and concept to allow the always-smaller German Navy to confront the Royal Navy.  However, it was adopted on the eve of Japan starting the Pacific War, and supplanted the polished plan to use submarines as the primary defense of the Dutch East Indies.  The chapter then covers the war.  This includes the powerful (on paper at least) Dutch-lead ABDACOM (American-British-Dutch-Australian Command), perhaps the epitome of Holland's desire to defend their colonies on the cheap, and a disaster.  By March 1, 1942, the only major warship left in the south-western Pacific was HDMS Tromp, undergoing battle-damage repairs in Australia.

Koninklijke Marine wasn't the only one to risk their ships with Risk Theory.  The book touches upon the influence of Risk Theory on Churchill's decision to send Force Z to its doom.

Conclusion is a half-page paragraph summarizing the disaster that was the Koninklijke Marine in the Pacific.  The author objectively broaches the realities of trying to create a credible navy for a small country with a parsimonious government, coming out of the worldwide Great Depression.  The author also reminds us that what ships that small country built were impressive designs with some world-class systems.  In the first week of the war, RNN submarines seriously damaged a Japanese invasion force in the one example of the pre-war submarine strategy.  He briefly remarks upon the otherwise good performance of what was left of the Koninklijke Marine for the rest of the war.

I find this book very interesting and eye-opening.  With so few ships to write about, the author was able to delve into aspects of launching a navy usually overlooked, such as the cultural and financial challenges Koninklijke Marine had to contend with.  The ships are the stars of this title, and some of them or their systems were unexpectedly impressive.  One thing I am disappointed about is from a modeling perspective: some Osprey books include commentary of the paint colors used on ships (Imperial Japanese Navy Light Cruisers 1941–45, New Vanguard 187.  The color profiles use colors beyond mere grays but we are left to guess and interpret what they are.  Camouflage colors - perhaps Osprey just doesn't want to open such a can of worms?  Disappointing all the same.

A satisfying gallery of photographs fortify the text.  Several were exposed during or right after combat.  The quality ranges from studio quality to amateur grab-shots.  Two of the more remarkable are: an Imperial Japanese Navy aerial photo of a burning RNN ship in the background; three RNN ships under air attack off Sumatra.  One color photo is included, a Do-24 preserved in a museum.

Artist Paul Wright created original Color artwork of what is no longer left to photograph, enriching the book.  They are accompanied by callouts that narrate the image.

A. Java Class Cruiser Java, (1938) in profile and plan view.  Captions include development history, and technical description of the class in 1926.

1.  Profile as she appeared in 1930 with a floatplane.  Two detailed narratives describe the ship and present her specifications c.1930.

2.  Gerard Callenburgh Class Destroyer Issac Sweers: profile as completed in England in May, 1941; description of specifications as ordered, 1938.

I think that the artwork enhances the visual element of this book, and that visual component richly supports the text.

I find Osprey's The Royal Netherlands Navy of World War II to be a very informative book that answers questions I've had for a long time.  It is the perfect companion to Osprey's Java Sea 1942, Japan's conquest of the Netherlands East Indies.

Modelers, artists and historians should find this book desirable and inspiring of interest in the ships.  Niko Models and Pacific Crossroads Company have kitted many Koninklijke Marine ships in 1/350 and 1/700, and I read that they are splendid kits.

The one thing about this book I am disappointed about is from a modeling perspective - no commentary on camouflage colors.  Some Osprey books include commentary of the paint colors used on ships, i.e., Imperial Japanese Navy Light Cruisers 1941–45, New Vanguard 187.  The color profiles use intriguing colors beyond mere grays but we are left to guess and interpret what they are.

With sources from the Netherlands National Archives and Dutch academic sources, we have a deeper understanding of the Koninklijke Marine.  RNN ships are described in more detail than I am used to in New Vanguard books, and the "behind the curtain" narrative of the Dutch government is informative.  I recommend this book.

Highs: In-depth content beyond what I am used to in New Vanguard books.  Exceptional gallery of photographs and artwork.

Low: RNN ships are illustrated with intriguing colors but without any description or commentary.

Verdict: Modelers and artists should find this book desirable and inspiring of interest in the ships.  It affords a deeper understanding of the Koninklijke Marine.

Thank you Osprey for providing this book.  Please remember to mention to vendors and retailers that you saw this book here - on Model Shipwrights. 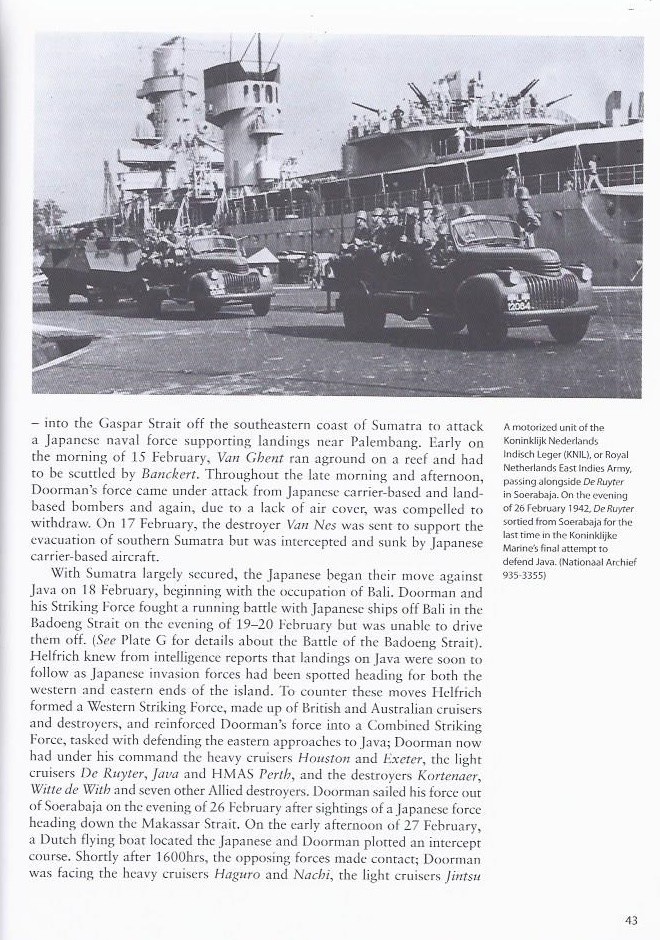 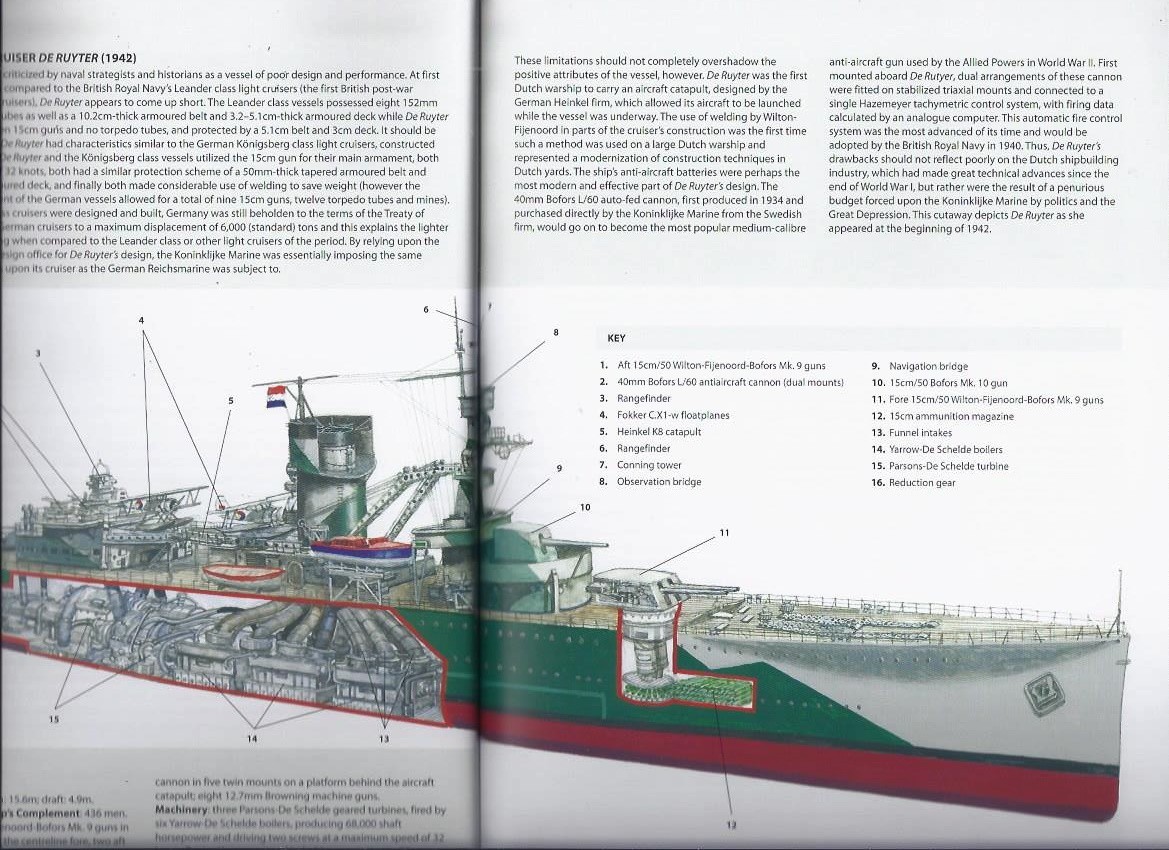 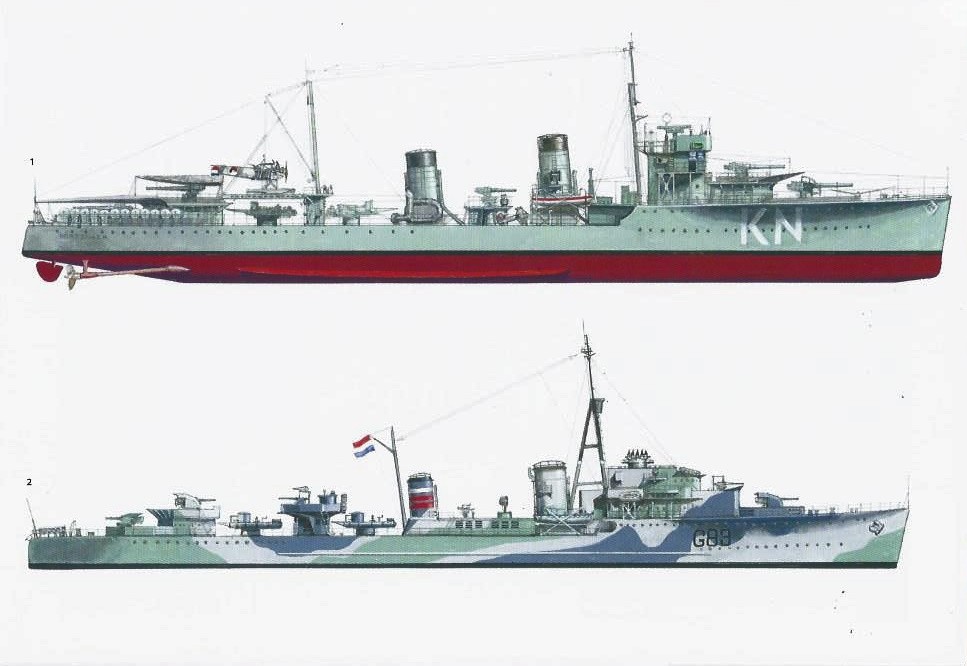 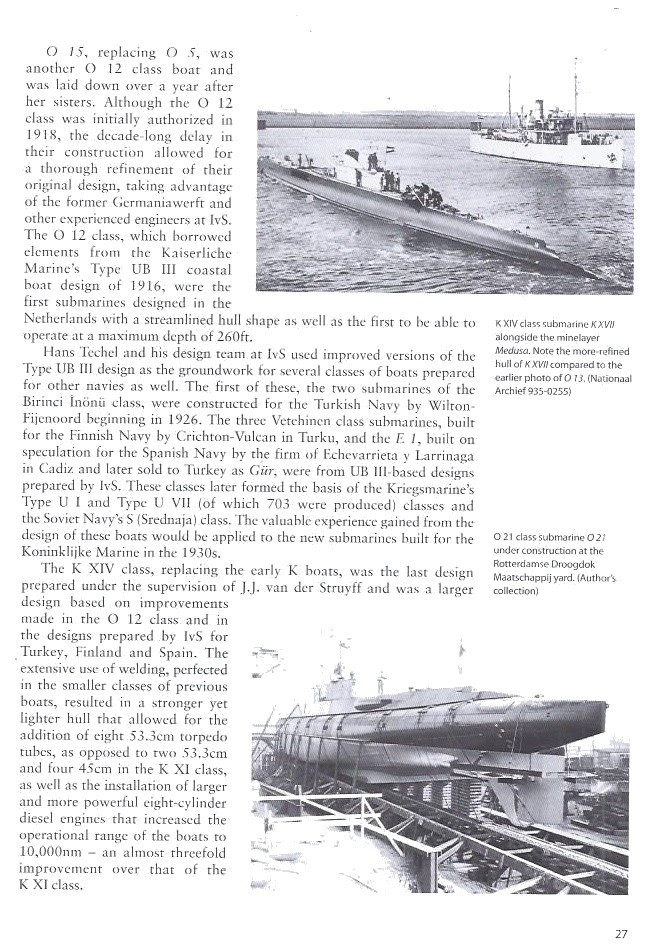