Jim Starkweather
Admin
posted on 2 years ago — updated on 1 year ago
3,974
views
Suresh shares his feature article on this naval diorama built in 1/144 scale. 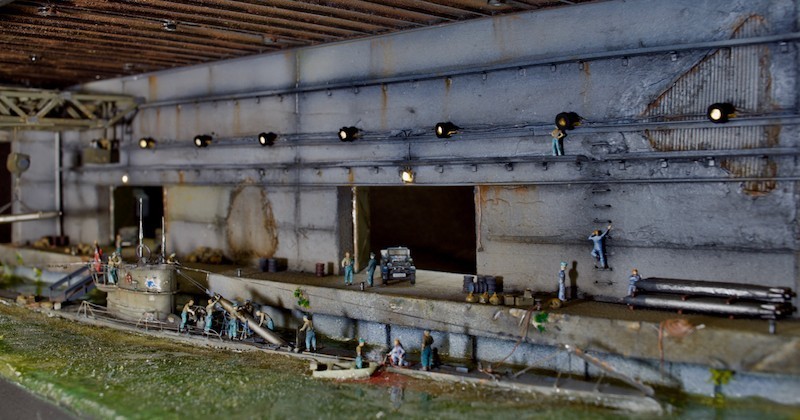 I had planned to do this for a while. This was not simply because of the sheer scale and execution of the thing but more so to get the historical accuracy and research on the u-boat den which is in itself an engineering marvel. It is a concrete bunker and has withstood intensive bombing and is even operational today!

More than this the story Das Boot is a great piece of fiction. At the end of the movie U-96 (with black swordfish emblem) comes into harbour and everyone dies. In reality this didn’t happen and the fish was turquoise green. The symbol of the 9th Flotilla, Der lachende Schwertfisch or the "laughing Swordfish" became the unit symbol after Lehmann-Willenbrock assumed command. It had previously been the conning tower emblem on his previous command, U-96 of "Das Boot" fame.

Both the novel and the film had a much darker ending than in reality, where the U-boat returns to port only to be destroyed during an air raid with many of her crew killed or wounded. In reality, U-96 survived the war unscathed with the majority of her senior officers surviving as well, but much like its on-screen fate, it actually was sunk by Allied bombers at its berth in Wilhelmshaven in March 1945. 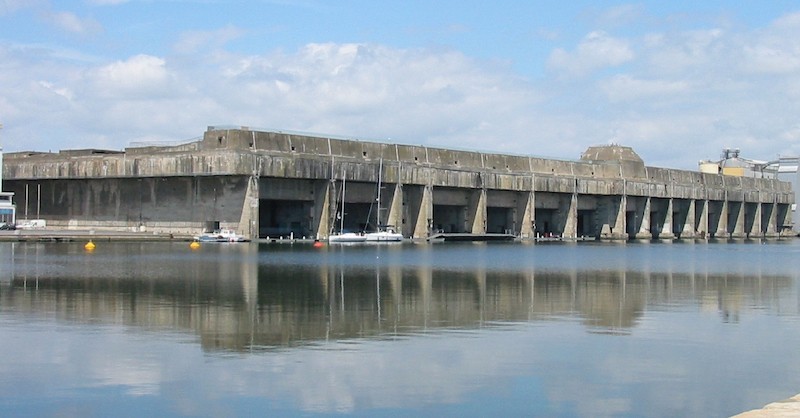 Planning something like this is complicated especially from the point of view of space – there is a lot of space around any ship that needs filling. Out at sea one doesn’t expect much but at harbor there is a lot. Also it needed to fit in my display case.

Pen number 14 at St Nazaire is all the way to the right. It is next to a concrete platform where the road comes in and there were cranes in that area. This was hinted at to give a sense of location. The U-boat was obviously going to be in dock which means everything was going to be dark. I took a Facebook poll on whether or not I should have a roof over it and it was unanimous. Hence I was going to have to build a (gasp) shadowbox. The rest then was easy (not!). The model had beautiful interior detail and I wanted to provide a viewing window to highlight that as well. I would have to cut out viewing windows in the hull.

I bought the Targa 1/144 U-boat VIIC toy nearly 20 years ago. At the time the Revell model was not out yet and this was the only thing out there. It has raised panel lines and is reasonably painted but the details are quite coarse. Naturally everything had to be re- done.

The model comes in multiple sections and meant to be sold in one of those crane machines. The first step was to glue all the sections together. Warpage was significant and required a lot of internal bracing. I cut out the viewing windows respecting the position of the internal ribbing – I felt this gave the cutaways a more authentic look. I then repainted everything and installed the figures. I got most of it right except for the warhead colour which I later discovered was more likely to be blue grey (too late to change!). The details are remarkably authentic and even include the fore and aft toilet. I then worked on the LED lighting for the inside of the submarine. I chose the yellowish light as it had better visibility than the red battle station light. That done the sub was buttoned up.

Since purchasing the Targa, upgrade parts had been released for the Revell kit. I super detailed with photoetch from Gryphon models. The set is incredibly detailed and gives the model needed accuracy. I have not built a ship in many years and had a rude awakening as to why……you haven’t done photoetch until you’ve done shipping photoetch. This stuff is really hard! If there’s such a thing as an eye-cramp, I got it.

Being a toy there are many parts like the gun block and conning tower deck that had to be rebuilt out of styrene. Constant refitting with the base was needed to provide sufficient support for the main structures while providing room for the viewing window.

The rest of the structure was built out of balsa wood. As I mentioned above this was going to close up the display and so I created a few roof lights for mood lighting (this is not meant to be historically accurate. In the corner of the roof is also the master switch. I used a voltage regulator to knock down the total voltage to 5V. This allows three LEDs in series per parallel arm. All said the lighting setup cost less than 10 bucks.

I cleaned up the sub and painted it in white primer. I then used acrylic paste to form the base layer of water and kitchen foil to shape it. I sprayed the structure with concrete spray and finished painting the submarine (see below).

The model was then embedded in the diorama and woodland scenic real water was poured in place. This is a product that comes in beads that you heat up, melt and pour in place. You then use a heat gun to melt everything to shape. This would NOT have worked with a styrene model. A lot of the styrene parts that I made for the model were ruined and had to be remade. The model itself is made out of durable plastic almost like Bakelite and it took the heat well.

The surface texture was then finished with acrylic medium.

The little boats are vacuum formed off of wood masters and the accessories around scratch-built from various cross sections of plastic stock. The sacks and hams and sausages were provided in the kit or formed out of epoxy putty and solder wire. Smoke is cotton wool. The LED for the soldering stations flicker red.

The rest of the vehicles are various structures from Shapeways – a 3D printing house. The gantry is scratch-built from references from Rochelle (where they shot Indiana Jones and the Temple of Doom). The wall lights are more LEDS. They all go to a secondary conduit on the right disguised as a drainage pipe. This leads to the viewing window where a secondary switch for the underwater view resides. I finished it with a Kriegsmarine and U-boat badges bought over the net. The Kriegsmarine eagle carries a pin that doubles as a hook that holds the roof up. The Swordfish is cut from sheet metal and painted brass.

The U-boat Viic was painted as per U-96. It had a base color of grey with no stripes. The swordfish is turquoise which is about right. The movie version is black, which is (probably) wrong. The model itself had these two snowmen which while authentic would have been too kooky. Weathering was kept true to scale with a bit more contrasting than I like but otherwise it could not be seen.

The figures were airbrushed en masse and detailed with washes.

At the final go the master switch was thrown….. and it all worked! I was very relieved with the final completion of this diorama. What started as a simple collectable ended up dragging over many years due to other commitments. Any World War 2 history enthusiast should have a diorama of the U-boat Viic like this in his collection. 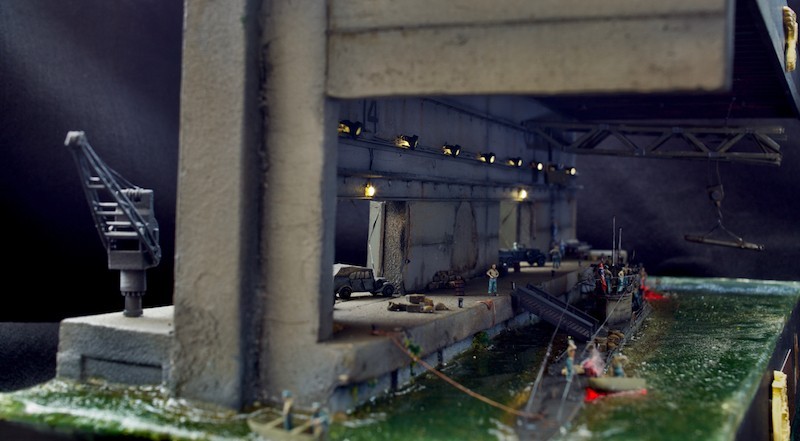 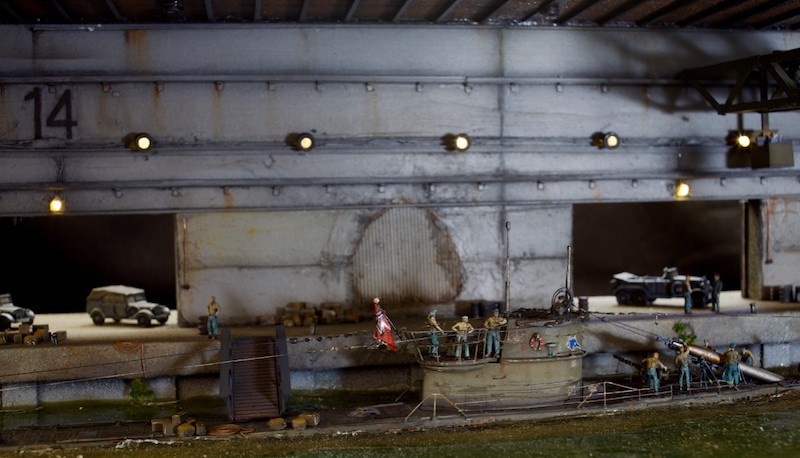 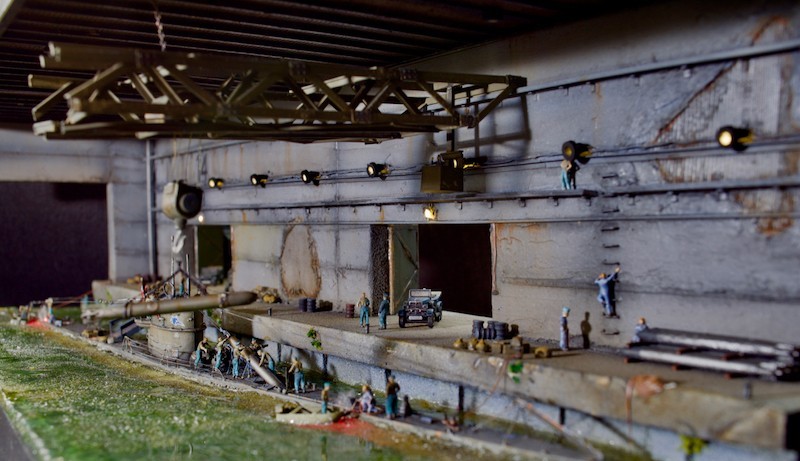