The second USS Bainbridge (Destroyer No. 1/DD-1) was the first destroyer, also called "Torpedo-boat destroyers", in the United States Navy and the lead ship of the Bainbridge-class. She was named for William Bainbridge. Bainbridge was commissioned 12 February 1903. She served in the Asiatic Fleet before World War I and served in patrol and convoy duty during the war. She was decommissioned 3 July 1919.

The kit comes in a pretty non descript box, with only a small picture of the USS Bainbridge and the name and model number as a sticker on it.

Inside the top opening box, you will first find the instruction sheets, then loads of packing peanuts. Under all of that the full hull is nicely protected by bubble wrap, and the smaller resin parts packed in a nice little clip shut box. The photo etch sheet is in its own bag, but it has bent a little.

The flags are in the bottom of the box and the masts are tapped to the inside of the lid. Overall protection of the parts is very good. 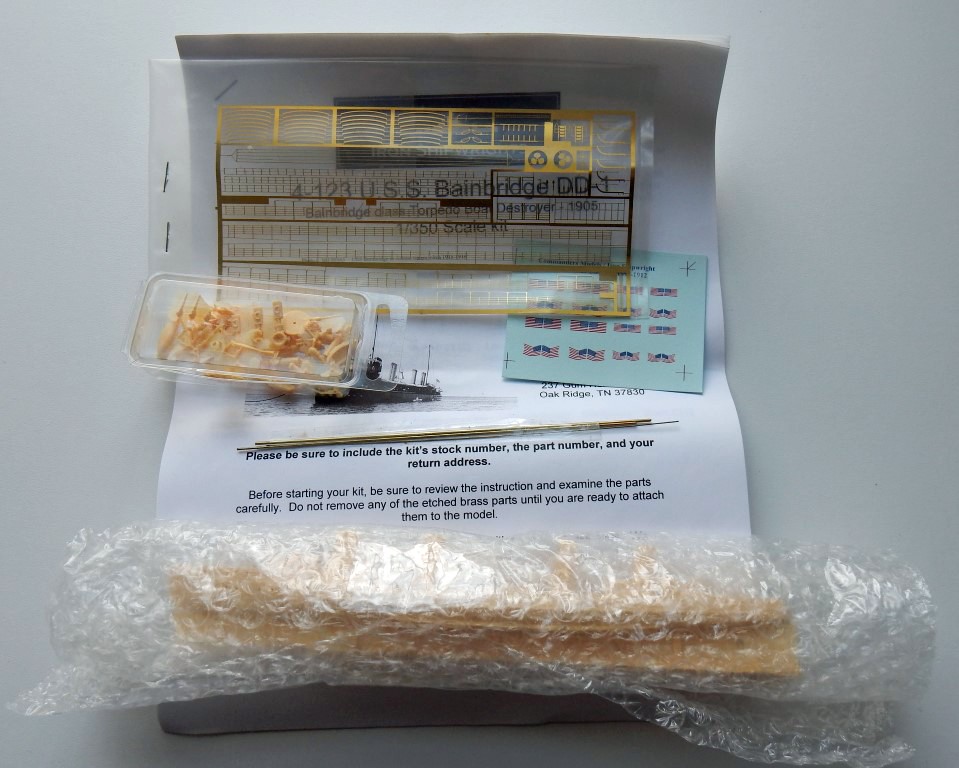 The hull is cast as a full hull, including the deck, and features the smoke stacks as part of the casting process, which does make painting these a little trickier.

A pour plug runs along the bottom of the hull, but this is only thin and doesn't look to much trouble to remove.

Port holes along the hull are partly drilled out, so it gives this area a little depth. 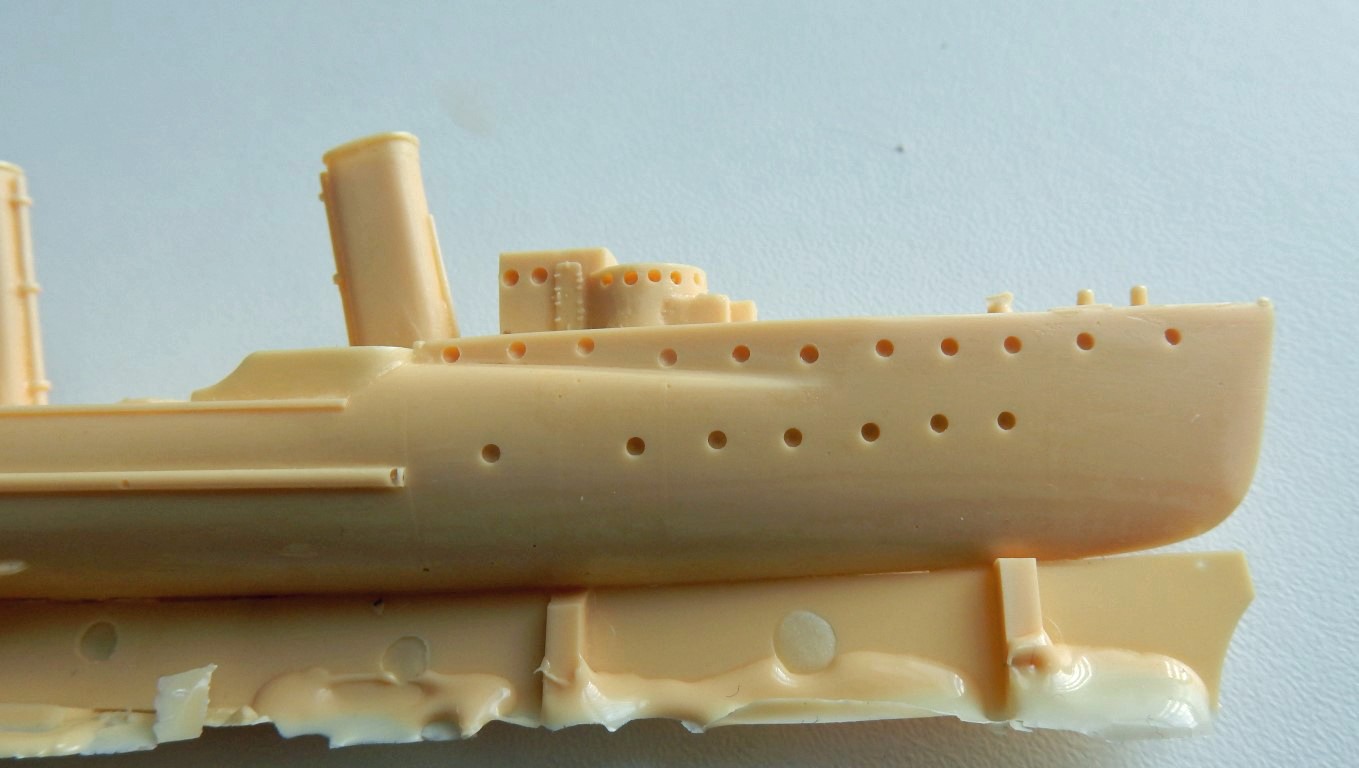 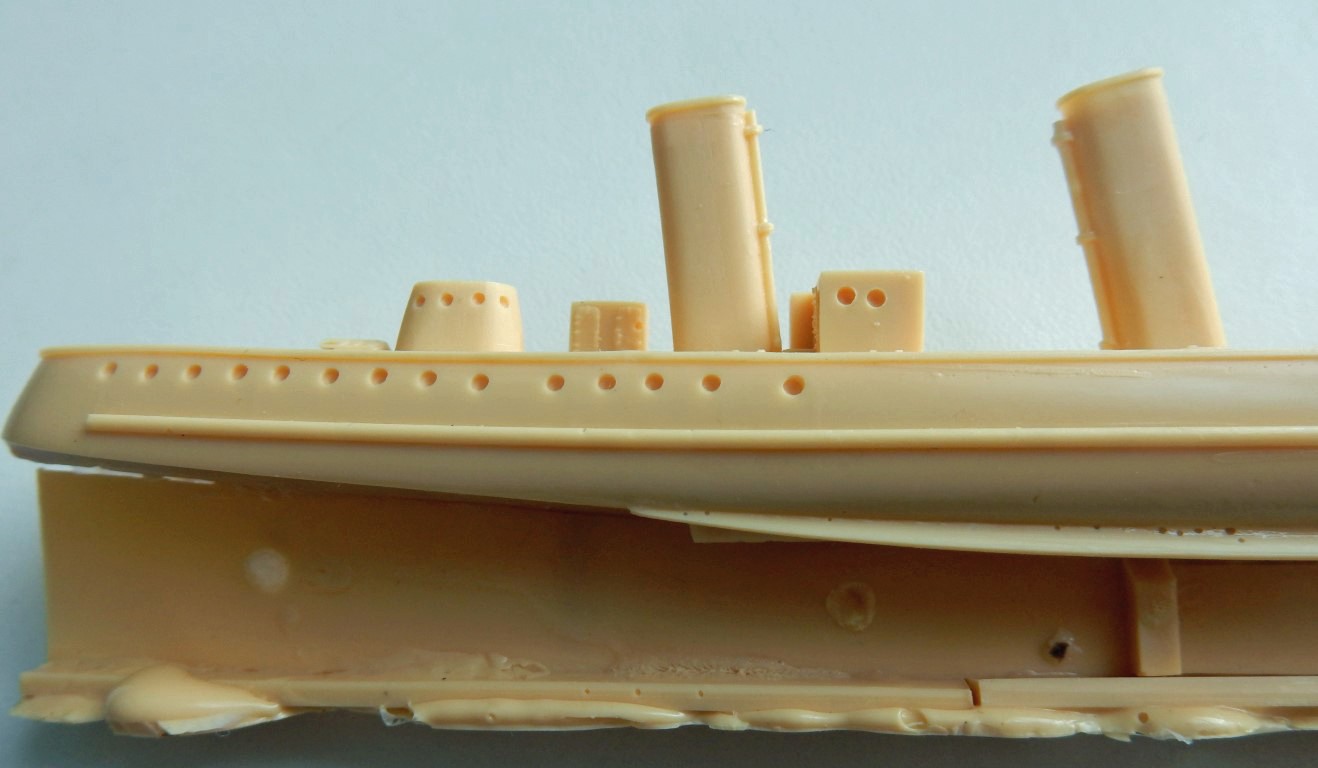 The deck has not got any details, and all the photos I have seen on the Bainbridge, do not show if the deck was planking or not.  A few deck hatches are cast into the deck , and positioning points for the various parts. 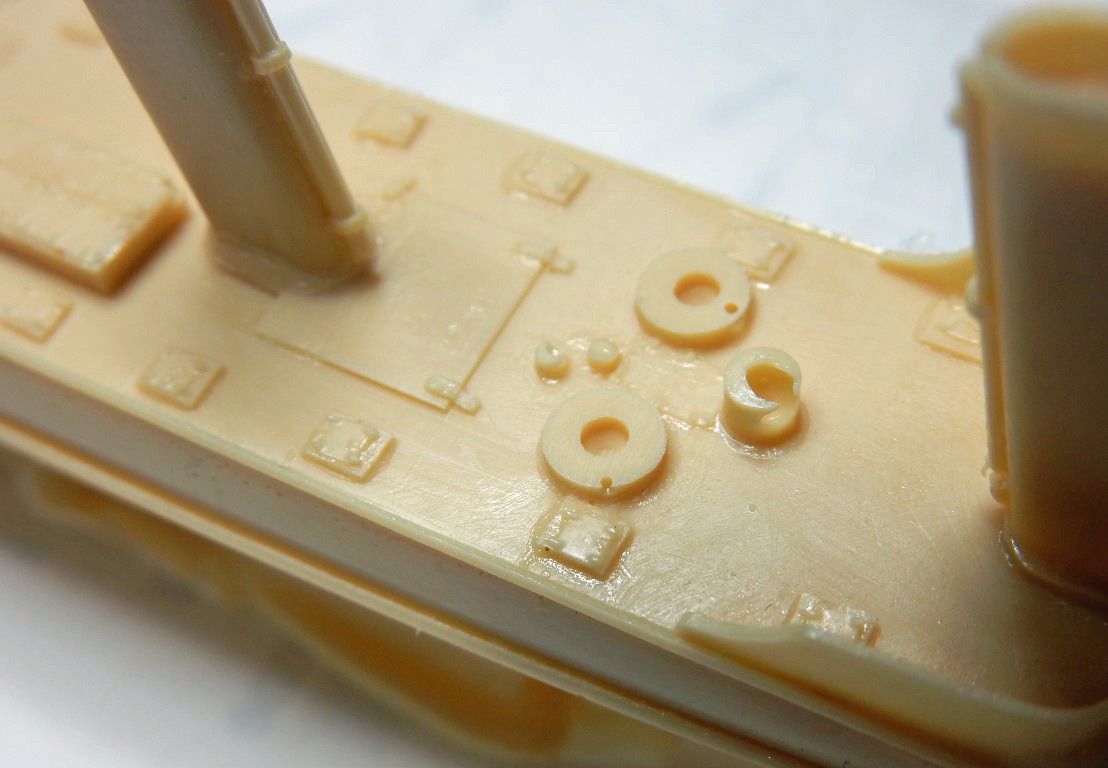 But you won't probably see a lot of it anyway as most of the deck was covered with canvas canopies, which are not supplied, so you will have to fashion your own. 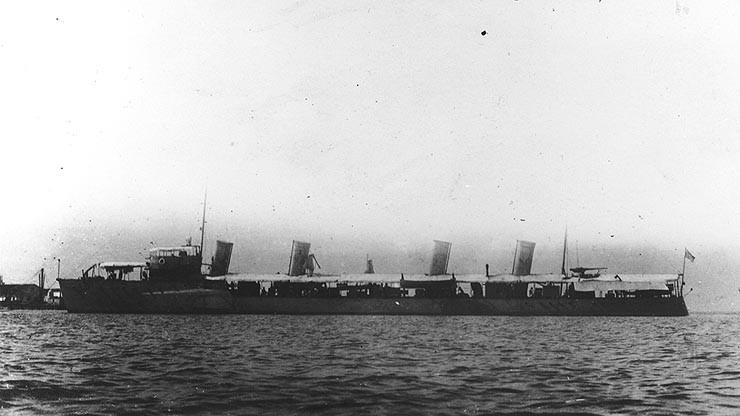 As already noted the smaller resin parts come sealed in a nice handy box. The parts cover such things as the vents, torpedo tubes, main and secondary batteries, boats, anchors, and other various parts.

A nice touch is the customer care department  at Iron Shipwrights as getting any of the parts replaced is easy as Iron Shipwrights feel its there duty to replace any lost, broken or miscast parts free of charge. 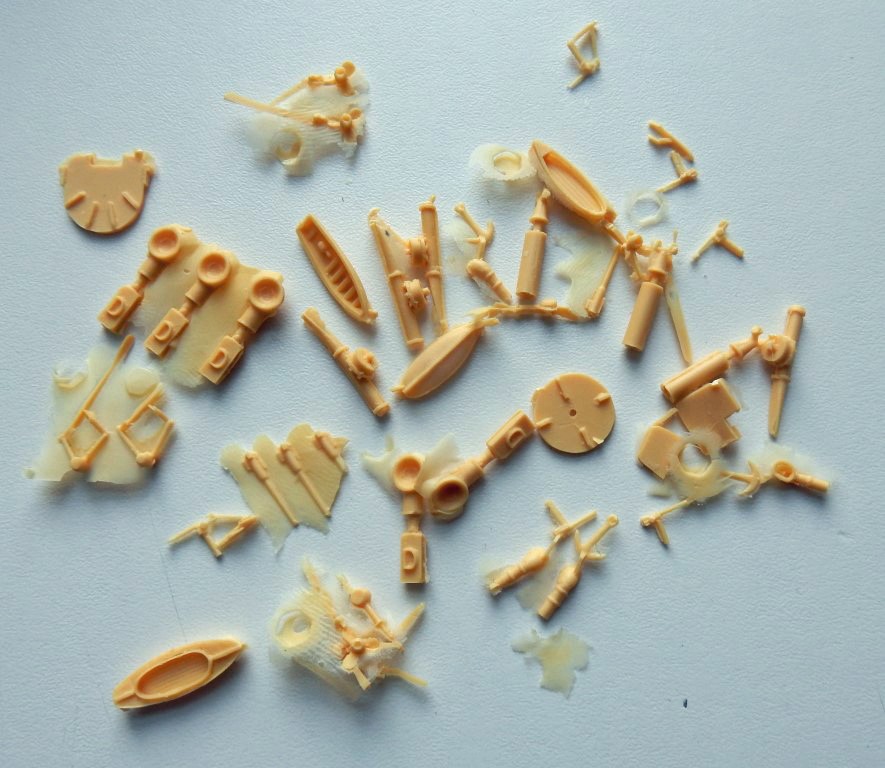 Most of the parts will need some form of clean up as a lot of flash and moulding lugs are present.

Detail is not too bad on the most part, but the guns are a little soft of details. 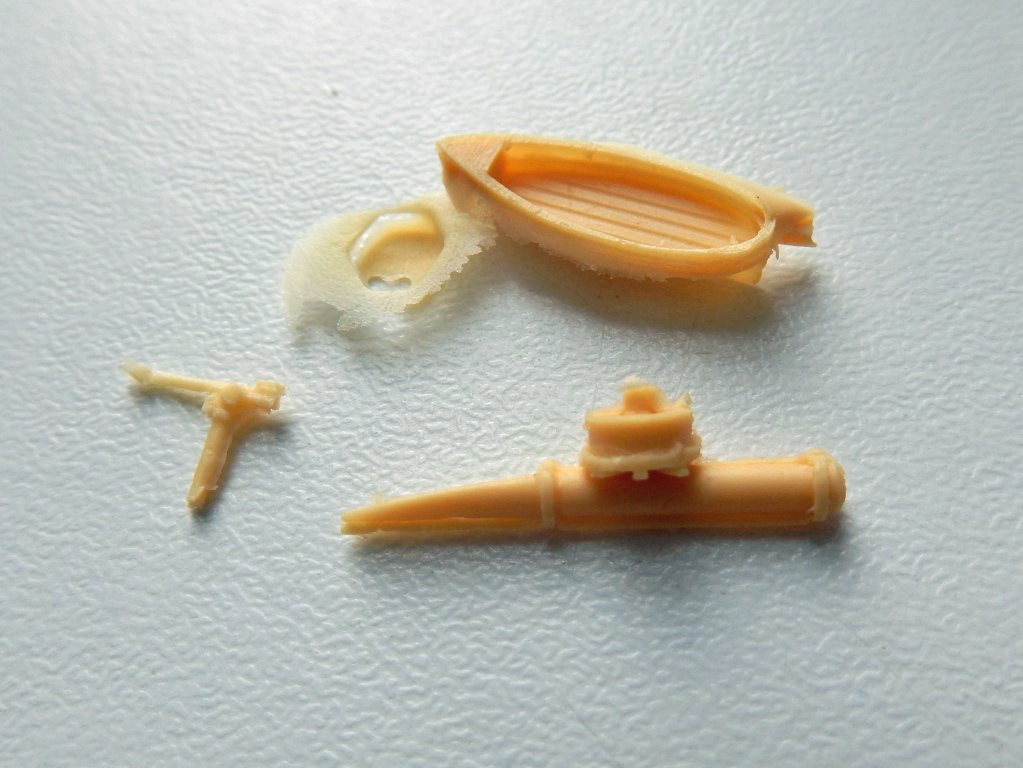 The photo etch fret holds on the most part all the railings found on the ship. Other parts on the fret are such things as supports, ladders and arches.

Although my fret is slightly bent, it looks as though it won't impact on the build much. 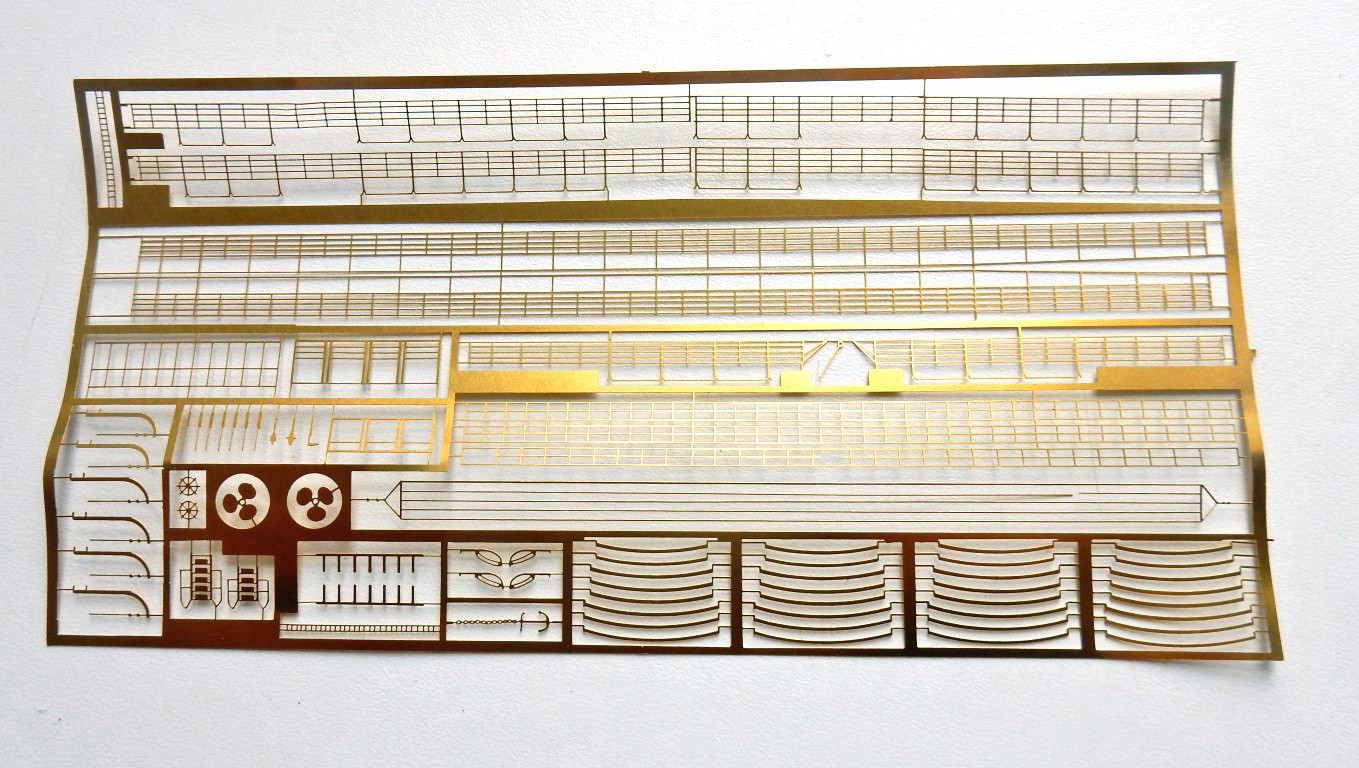 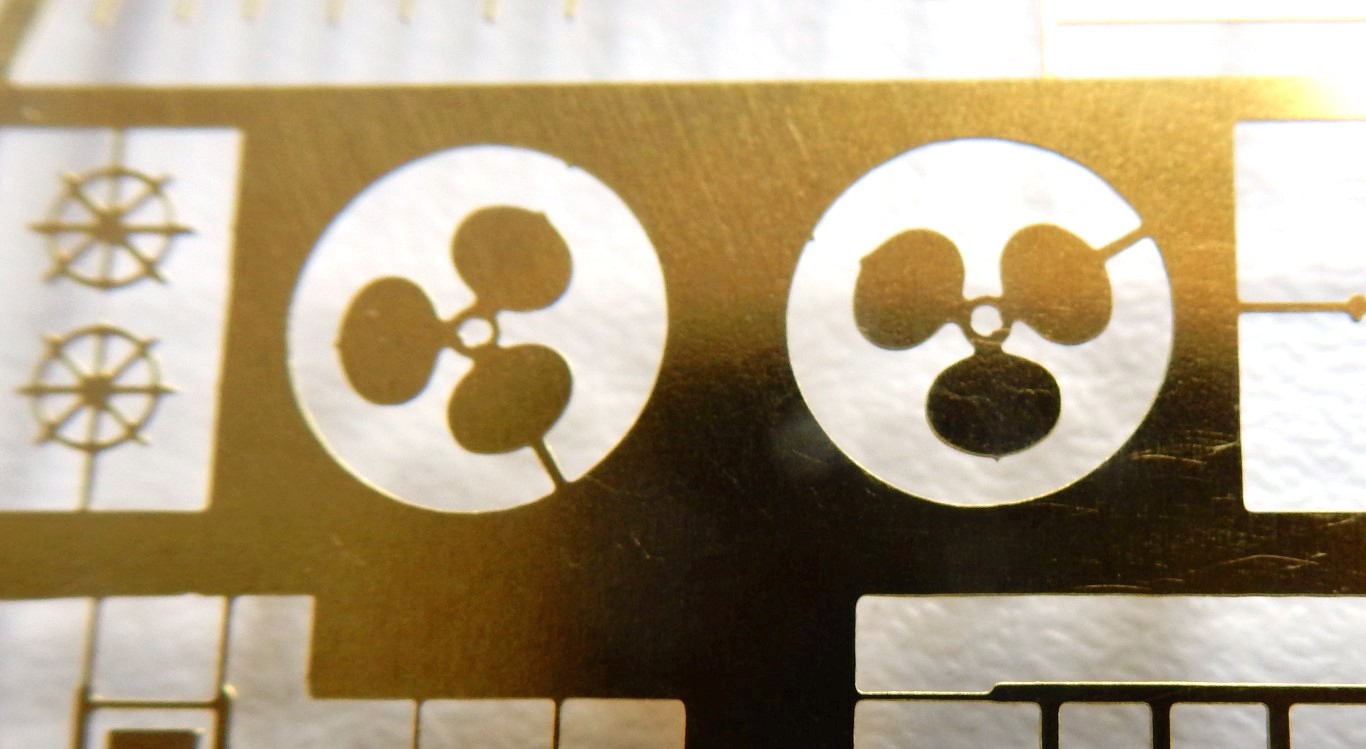 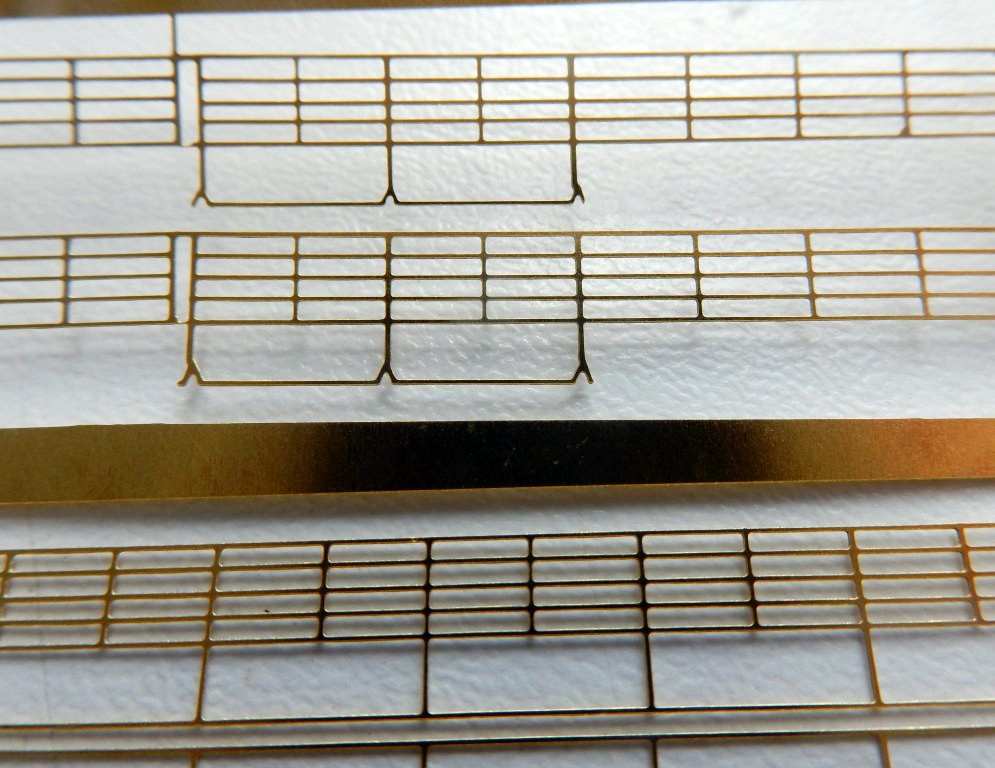 The kit comes with three different size metal rods. These are for the masts, yard arms and jack staff. 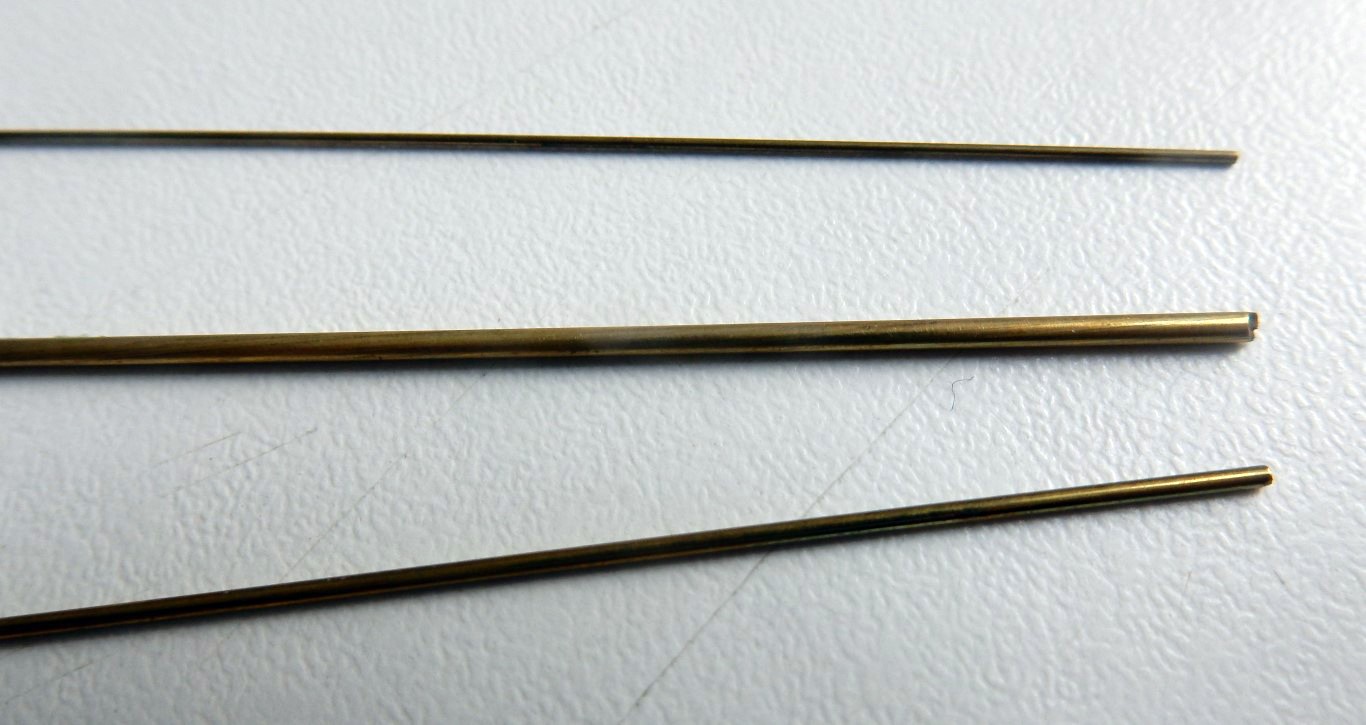 The instructions take the form of eight A4 size sheets stapled together.

Only one side of each page is used and is printed in black on white.

Although the instructions are not brilliant they are a lot better then some limited run resin kits I have seen.

No external colours are given for the ship, so looking up references will need to be done. 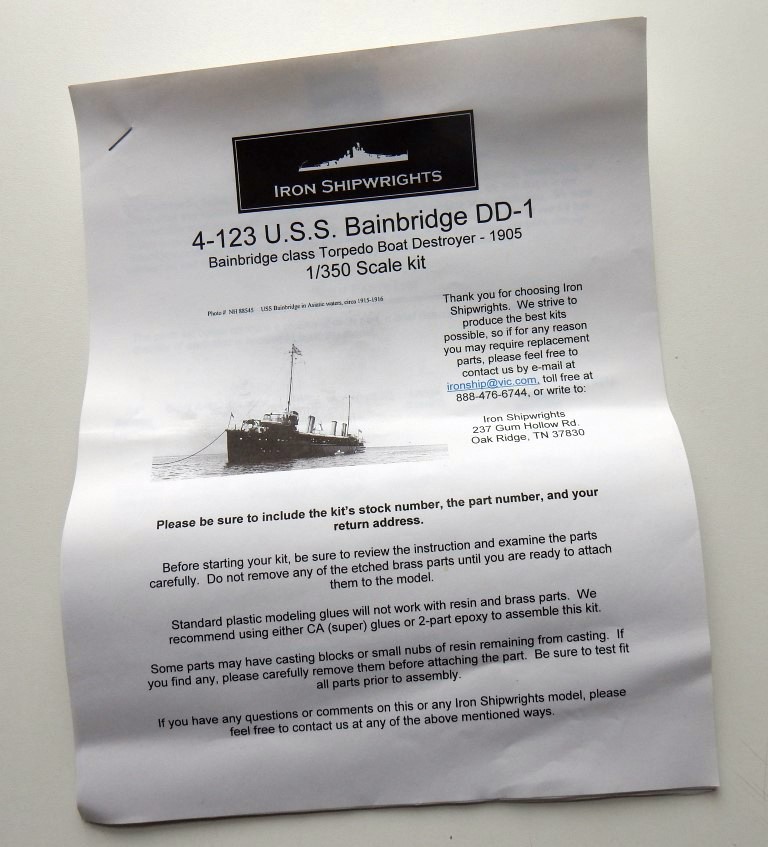 The second and third pages hold the parts guide, with the names of the parts and how many there is in the case of the resin parts. 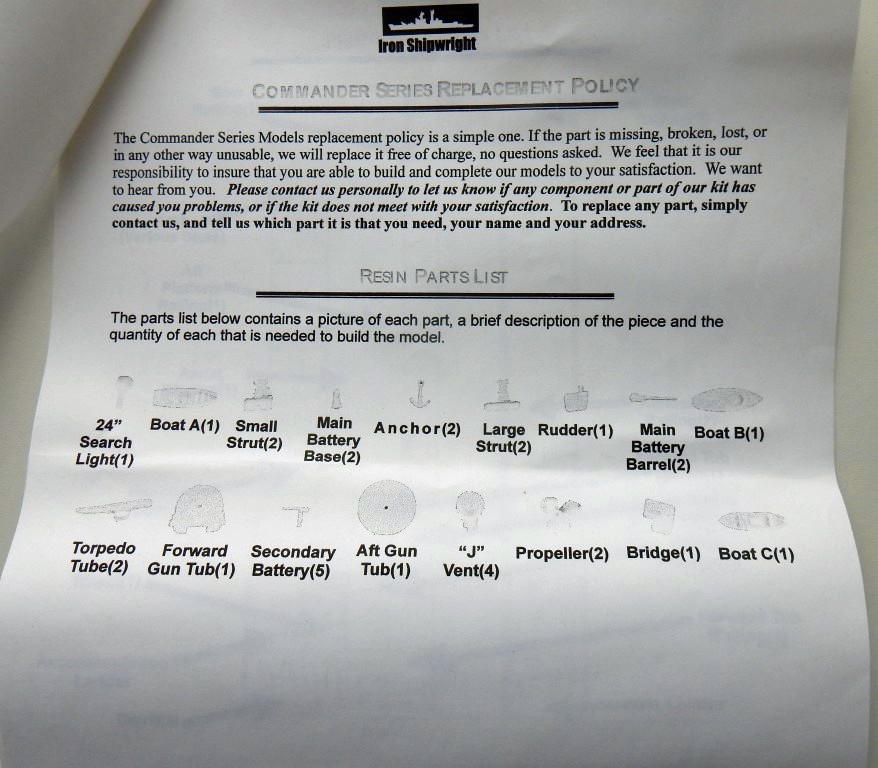 The build takes place over the remaining pages, with a rough placement and written guide to the build. 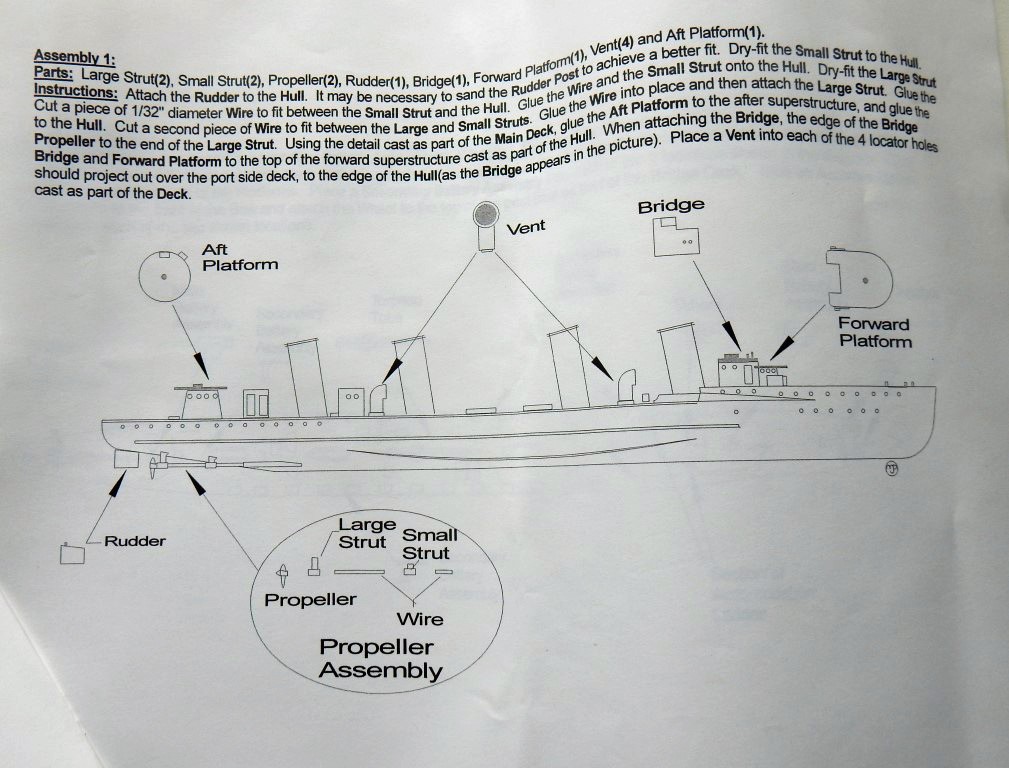 The last page concentrates mostly on the rigging diagram. 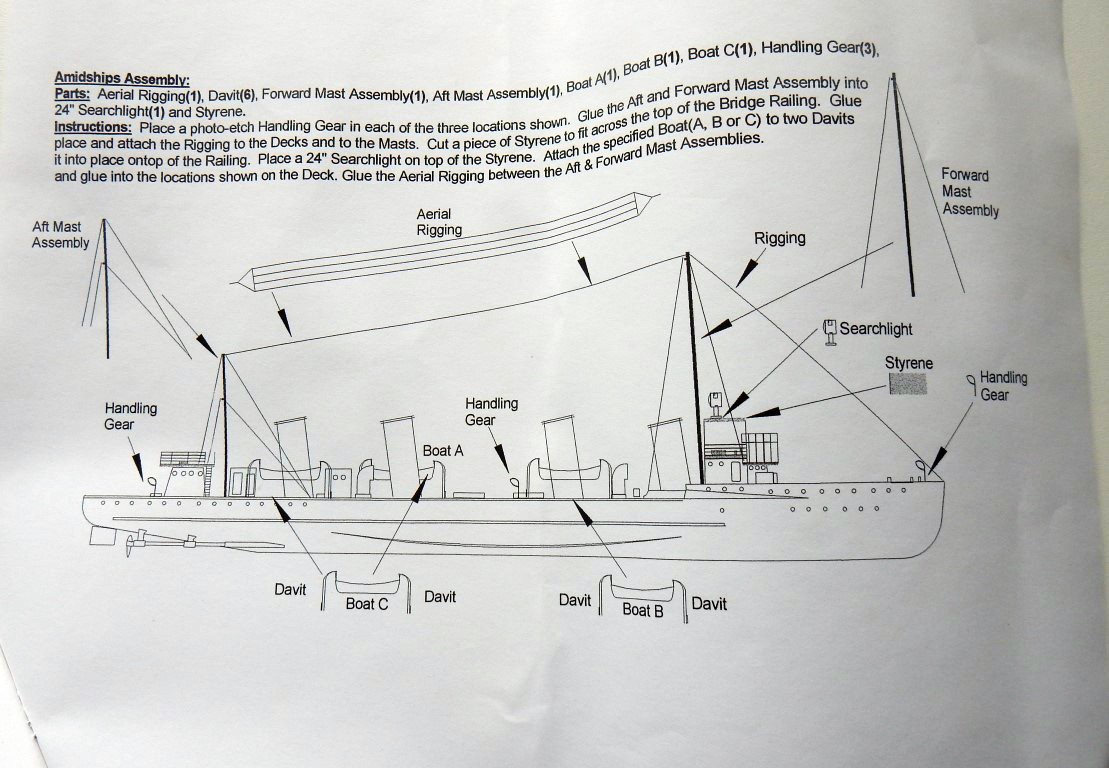 Two types of flags in two styles are supplied as decals. 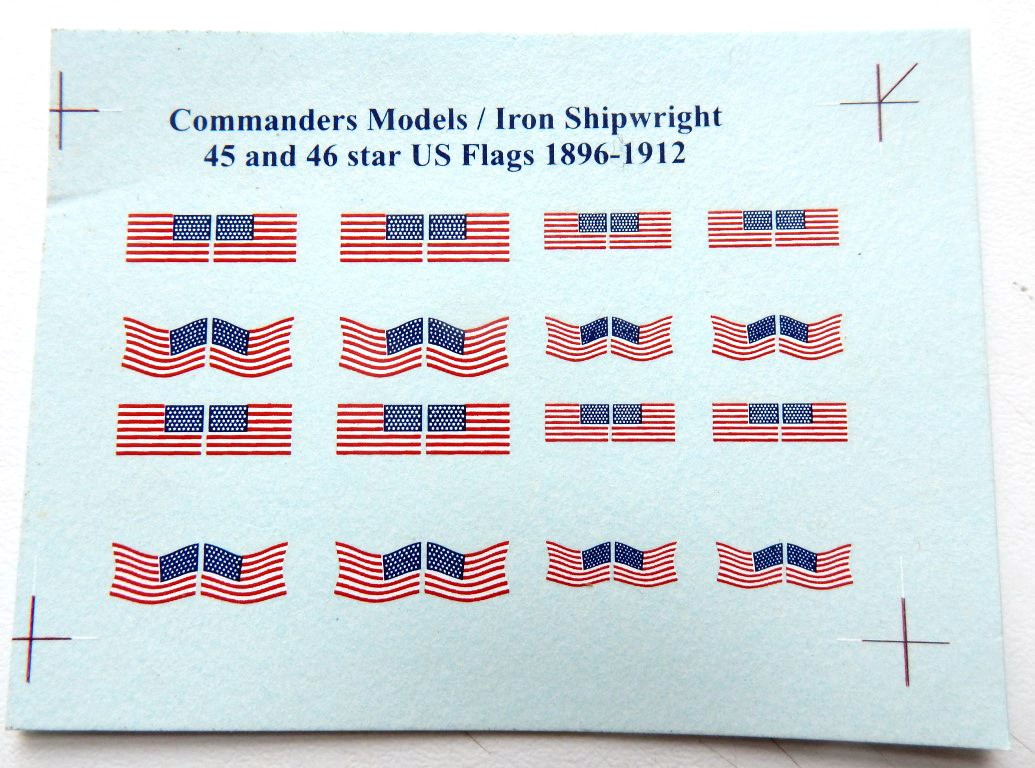 If you want to build the United States Navies first Torpedo Boat Destroyer this is your only option in 1/350th, and although its got a couple of faults detail wise its a pretty nice kit.

A little experience with resin and photo etch kits is needed to build this, but it doesn't look too taxing.

Please remember, when contacting retailers or manufacturers, to mention that you saw their products highlighted here - on MODEL SHIPWRIGHTS.