North Cape 1943 The Sinking of the Scharnhorst

JPTRR
Editor
posted on 1 year ago — updated on 1 year ago
1,016
views
North Cape 1943 The Sinking of the Scharnhorst is a new title from Osprey Publishing LTD. The 356th title in their Campaign series, it is the story of the last sortie of the veteran German battlecruiser and the British efforts to stop her from destroying life-sustaining convoys to Russia. 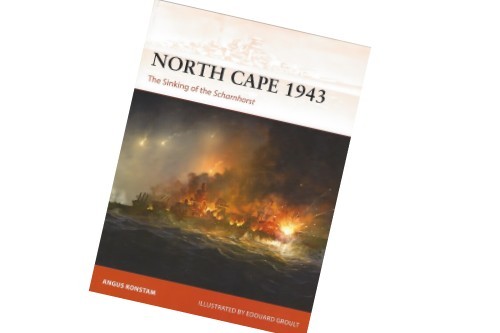 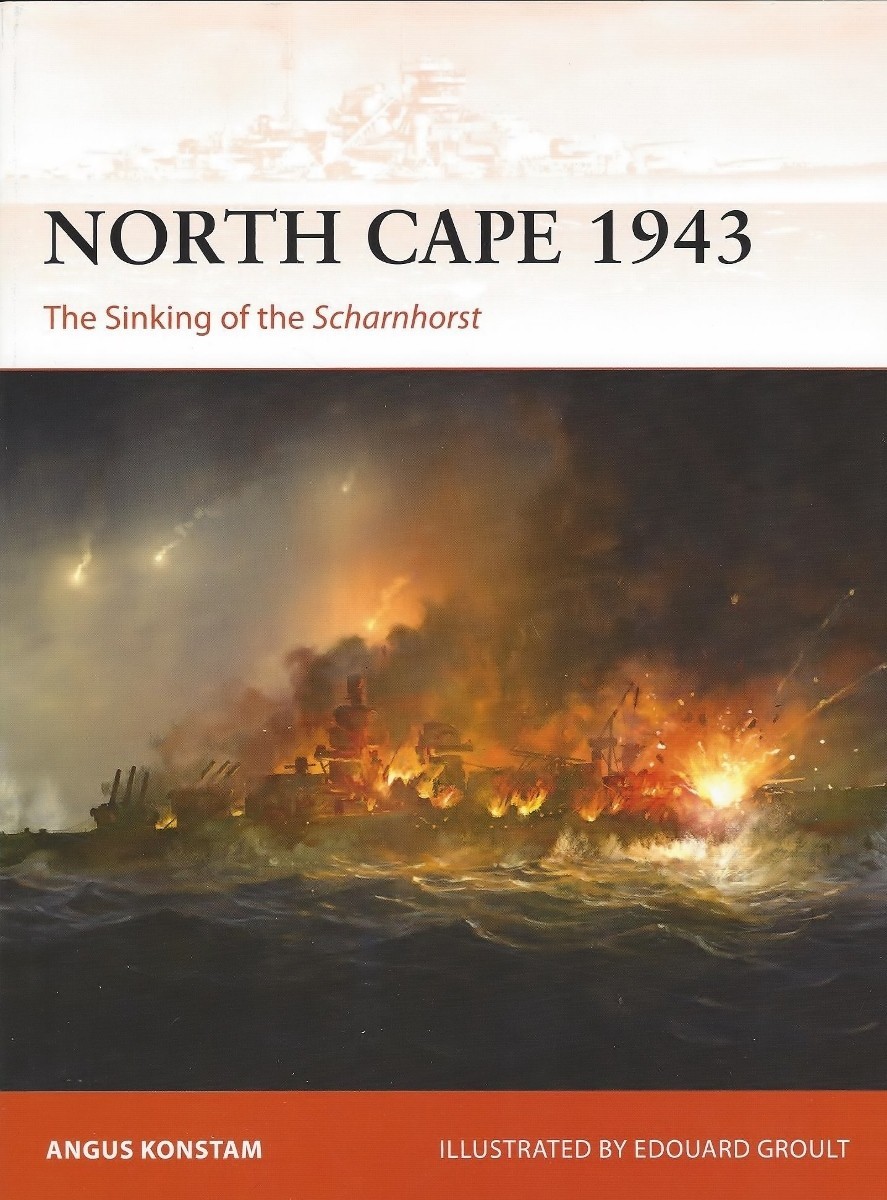 For almost four years Scharnhorst had an eventful career, including the sinking of an aircraft carrier, humiliating the British during The Channel Dash, and tying down elements of the British fleet.  She was considered both a battlecruiser and a battleship, with armament powerful enough to destroy all but a modern battleship, armor impervious to all except another battleship, and speed fast enough to escape a battleship.  Intended as a commerce raider, she covered the Nazi invasion of Norway, engaged warships, swept the ocean for convoys, and met her end attacking a convoy to Russia.  As Osprey tells us:

The German battleship Scharnhorst had a reputation for being a lucky ship. Early in the war she fought off a British battlecruiser and sunk a carrier, before carrying out two successful forays into the Atlantic. In the spring of 1943, the Scharnhorst was redeployed to Norway. There, working in concert with other German warships such as the battleship Tirpitz, she posed a major threat to the Arctic convoys - the Allied sea lifeline to Russia. Her presence, alongside Tirpitz, forced the British to tie down ships in Arctic waters.

When Tirpitz was put out of action, and Hitler demanded naval support for the war in Russia, the crew of the Scharnhorst under Rear-Admiral Bey, had to act.In late December 1943, she put to sea, her target an Allied convoy passing through the Barents Sea on its way to Murmansk. Unknown to Bey, the British were using the convoy as bait to draw the Scharnhorst into battle. What followed was a two-day running battle fought in rough seas and near-perpetual darkness, ending with the destruction of the Scharnhorst and all but 36 of her crew, ending any serious German naval threat to the Arctic convoy lifeline.

In this illustrated study, leading naval historian Angus Konstam offers a fascinating new insight into this key engagement. He combines expert analysis with his unique knack for storytelling to offer a fascinating new perspective on the battle which sank the Scharnhorst.

Osprey publishes an extensively detailed book about Scharnhorst in their Anatomy of the Ship series, which you can see here: The Battleship Scharnhorst.

North Cape 1943 is presented through 93 pages of  text and images, organized into eight chapters and several subchapters:

Origins of the Campaign

The Wreck of the Scharnhorst

Before the title page Osprey includes a list of naval ranks, and a key to military symbols.

I find the book well organized and well written by author Konstam.    Origins of the Campaign, Chronology, and Opposing Commanders provide 14 pages explaining the background and circumstances that led to this campaign, and the men who planned, commanded, and executed the events.  It also reveals a critical advantage the Royal Navy enjoyed.

Opposing Forces is the exploration of the ships involved.  I find it interesting about the difference in RN (Royal Navy) and KM (Kriegsmarine)radars, and the comparative qualities of RN and KM ships.

While Opposing Plans is only five pages, The Campaign is the bulk of the content with 52 pages narrating the campaign.  It is surprising how the KM employed its radar and destroyer assets.  Several 3-D ‘bird’s-eye-views’ refine the text with illustrations, keyed to significant events and actions.  Personally, I find these very helpful in understanding and following complex situations like naval engagements.   Aftermath recounts the strategic change the end of Scharnhorst meant for both the Nazis and Allies, and The Wreck of the Scharnhorst is a poignant postscript.

This is an interesting story and broadened my understanding of the Kriegsmarine’s battlecruisers effect on the Battle of the Atlantic, and Nazi Germany’s maritime mayhem in general. Scharnhorst and sister Gneisenau were beautiful ships and are popular model subjects, and this book can be the inspiration to build kits of them.

Photographic support of the text is good with numerous black-and-white images enhancing the written word.  There are, of course, many photos of ships and key personnel, aerial reconnaissance views, specific components and items of equipment, and icy scenes of the northern Atlantic.  Many are grainy but the majority are good quality.

1.       Map, The strategic situation, late 1943: The North Sea to Bear Island, showing German and Allied bases and airfields, and the extent of the ice pack.

3.      Two-page scene, Scharnhorst At Anchor in the Kafjord, September 1943: six ships and installations.

Convoy JW 55B formation: each ship in each of six columns. 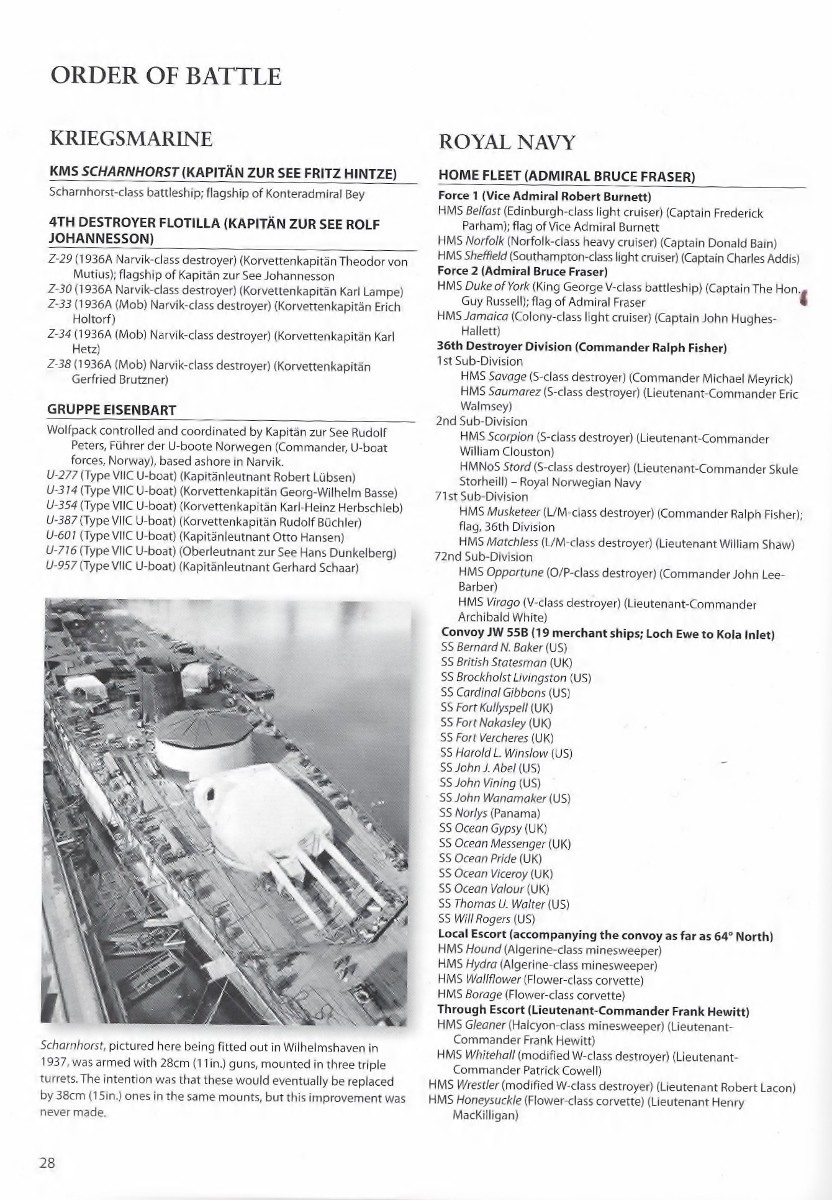 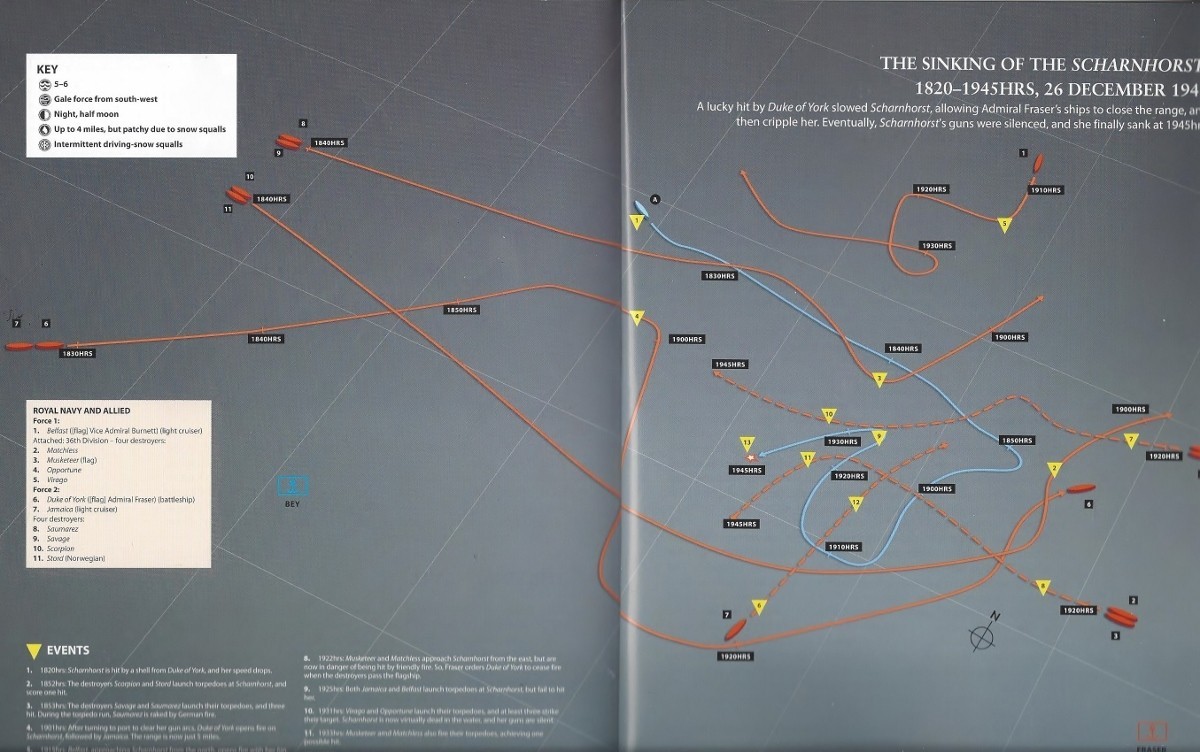 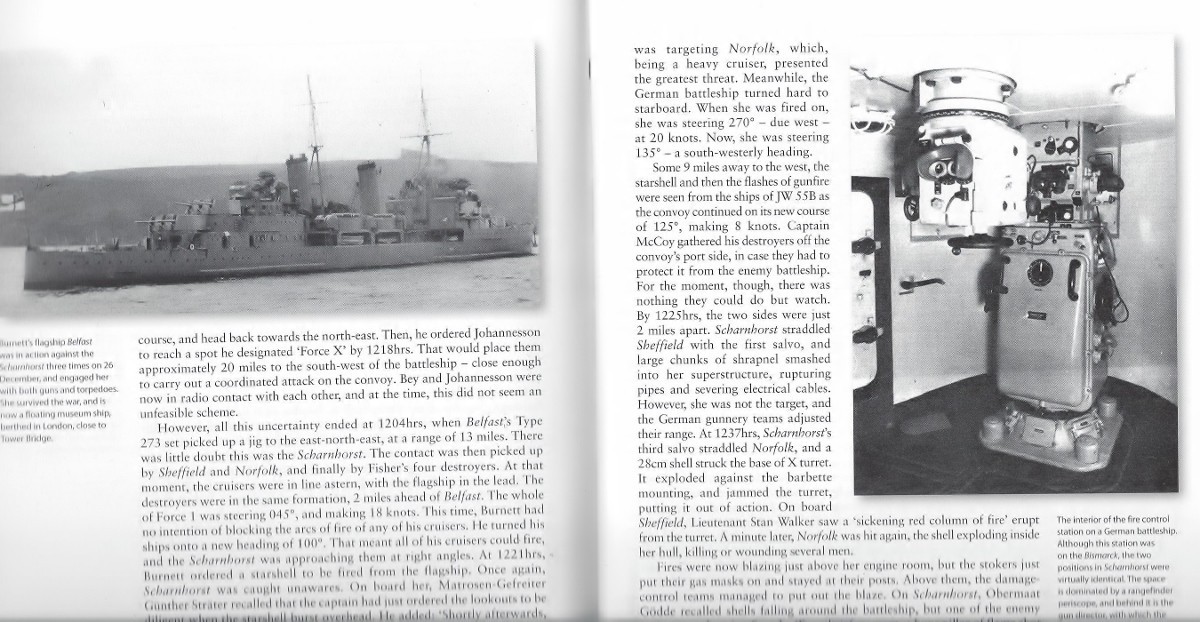 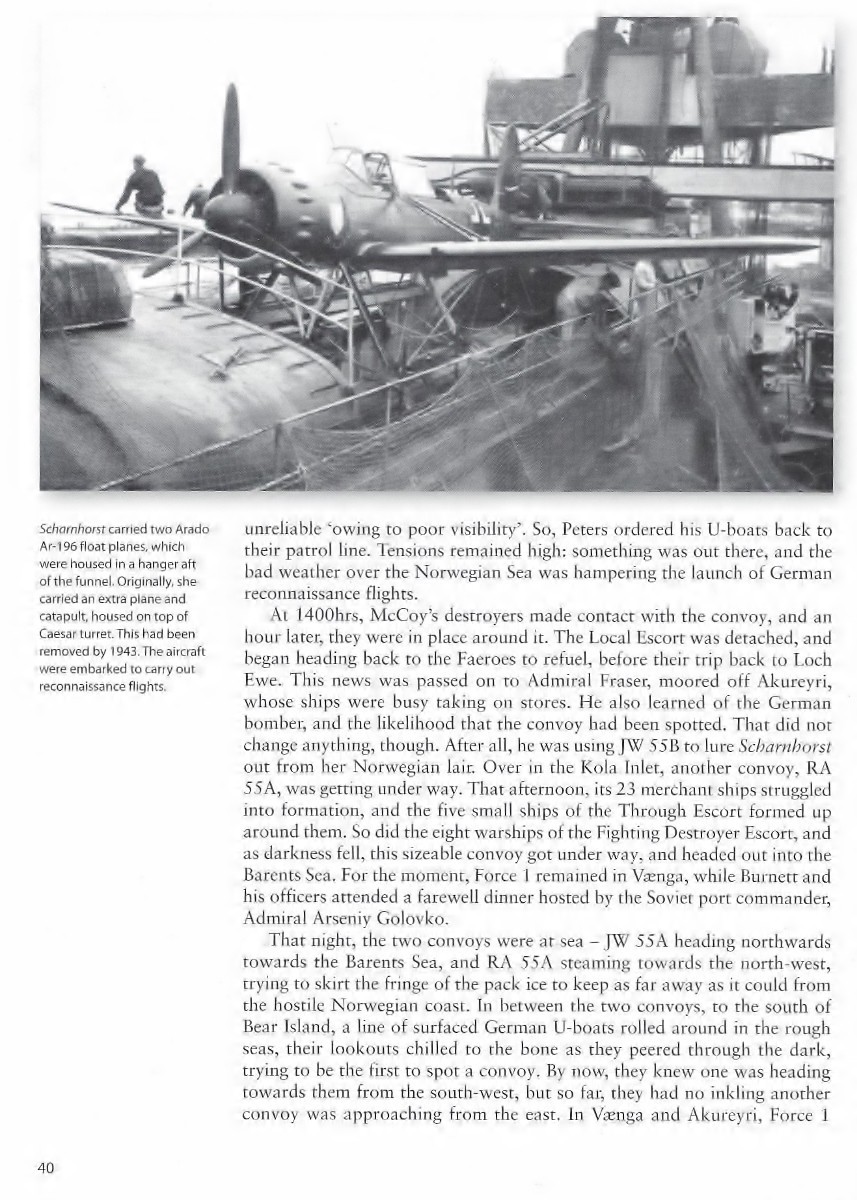 I found North Cape 1943 The Sinking of the Scharnhorst to be enjoyable to read and informative as it increased my knowledge of the campaign to eliminate the Scharnhorst.  The text is set out well and easy to follow.  I understand why Osprey considers author Konstam to be a leading naval historian.  Artwork and graphics supports the text.

I found nothing to criticize about this book.  Modelers should be inspired and the photographs can provide excellent source material for them.  Osprey has created another good title for students and modelers of the Scharnhorst, the Battle of the Atlantic, Royal Navy ships and German destroyers.  Recommended.

We  thank Osprey for providing this review sample.  Please mention to them and to retailers that you saw this product here - on Model Shipwrights.