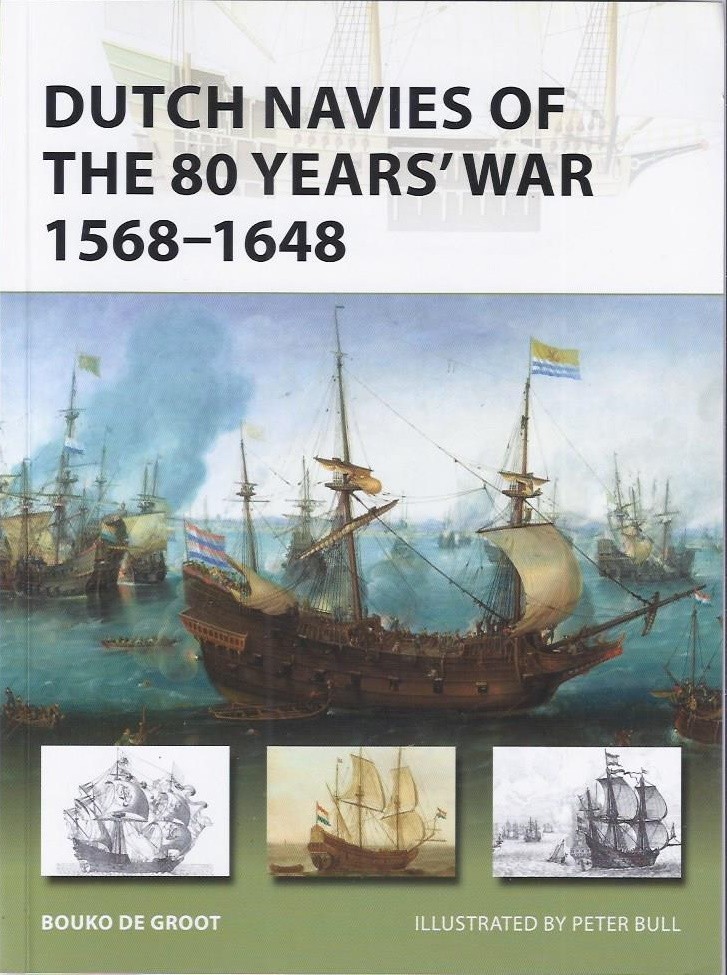 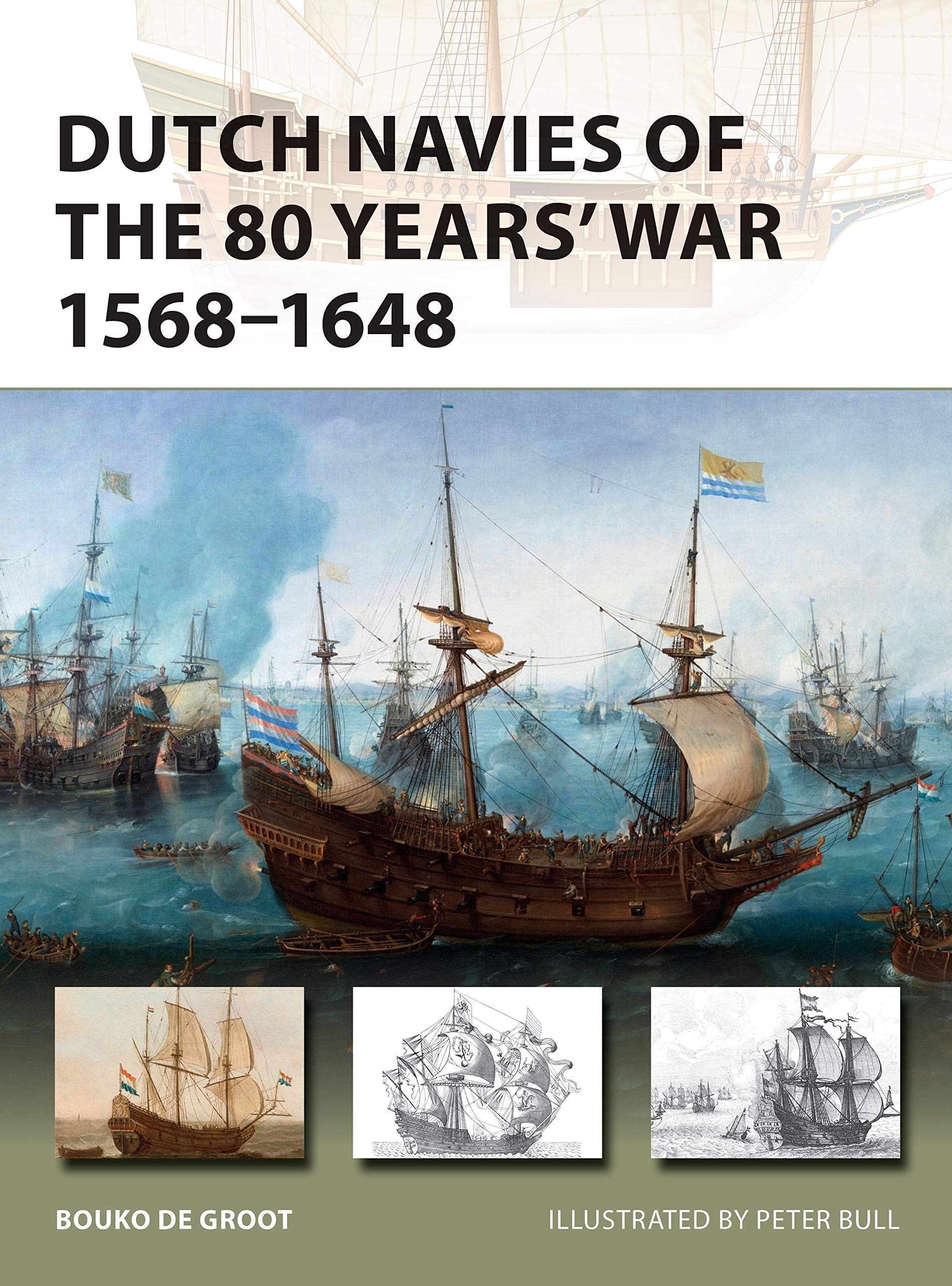 Over the past few years I have noticed quite a few new releases of sailing ships of the age of wooden ships and iron men.  With 80 years covered in this history, there is bound to be modelers and models who are waiting for this book.

Dutch Navies of the 80 Years' War 1568–1648  is a book from Osprey Publishing LTD.  It is one of hundreds of titles in their series New Vanguard, the 263rd to be exact.   Authored by Bouko de Groot and illustrated by Peter Bull, the book is 48 pages and available in paperback, ePub, and eBook (PDF).  The softcover is catalogued with ISBN 9781472831651 and Osprey’s short code NVG 263.  Osprey describes this book:

The tiny new state of the United Provinces of the Netherlands won its independence from the mighty Spanish empire by fighting and winning the Eighty Years' War, from 1568 and 1648. In this long conflict, warfare on water played a much bigger role in determining the ultimate victor.

On the high seas the fleet carved out a new empire, growing national income to such levels that it could continue the costly war for independence. Yet it was in coastal and inland waters that the most decisive battles were fought. Arguably the most decisive Spanish siege (Leiden, 1574) was broken by a fleet sailing to the rescue across flooded polders, and the battle of Nieuwpoort in 1600, the largest successful invasion fleet before World War II, was one of the most decisive battle in western history. Using detailed full colour artwork, this book shows how the Dutch navies fought worldwide in their war of independence, from Brazil to Indonesia, and from the Low Countries to Angola.

The fun of history delivered through these weekend reference histories is that I realize how little I know about so much.  During the period of this book The Renaissance and The Enlightenment were in progress, Spain controlled much of Europe where numerous generational wars wracked the continent, the Spanish Armada sailed, and European wars spilled out across the globe.  In the New World, Jamestown and other permanent settlements were founded.

The text is clear and well organized.   Each chapter covering the phases of the 80 Years' War are organized the same with these subchapters:

Explains the origins of each fleet, entities that raised it, structure of command, command and control, deployment, strengths and weaknesses.

Description of the vessels used.  Early in the rebellion, they were mainly merchant ships; only 18 years before a war fleet had been built but when the conflict they were built for ended, they were sold off.  Designs, displacements, armaments, crews, tactics are presented.  Some of the information is amazing, i.e., shallow draft vessel crews when overpowered often jumped overboard and waded to safety.  Sources of the weapons, mainly forged locally from metal donated by the populous, is interesting.  Paint or lack thereof is noted.

Describes the ship’s crew, their weapons and outfitting, and tactics.  Interestingly, boarding the enemy’s ship was the way these battles were fought, and the author describes gases and poisons and other chemical weapons used, and that battles could rage aboard for hours and even days.

This recounts raising of flags and other signals, pairing of ships for mutual support, expectations of flagships seeking combat with each other, expectations in victory and defeat, and tactical and strategic plans.

Introduction and Chronology explains the political and social upheavals and how they influenced the design of the Dutch vessels.  Civil War, 1568-87 explains the beginning of the civil war, the rise of pirate fleets and “sea-beggars,” and rebel and loyalist fleets raised to support the fighting on land.  It covers Dutch assistance against the Spanish Armada and recounts various treaties with various entities.  The common size of vessel is noted, as well as shallow draft vessels used over flooded lands.  War for independence, 1588-1620 saw the formal establishment of admiralties and evolution of command and control.  Blockades of the Flemish coast saw Dutch sailors heading to Asia and Africa themselves and the subsequent creation of the VOC (Vereniandgde Oostindische Compaginie: United East India Company), and a Dutch capital in Indonesia was established.   Coalition war, 1621-48 saw other wars in Europe changing dynamics for Spanish operations in Holland, professionalization of the Dutch Navy, war with former ally England, and a Dutch fleet rented as mercenaries to Sweden.  Sections Organization, Ships, Aboard, and In action continue to present the changes during this epoch.

On the fringes is interesting to me as this war saw the largest successful amphibious landing until D-Day.  It also describes how the wars covered in this book were fought in Africa, South and Central America, and on the other side of the earth in Indonesia.  Atypical designs is fascinating as it chronicles “burster” ships and other types of floating bombs and fire boats, rams, bridge-buster boats, and "brown water navies" to names a few special vessels.

Conclusion reviews all of the prior information. It explains how seven rebel provinces became a global superpower due to the centralization and professionalization of the Dutch Navy.  There is a great deal of useful information that should inspire modelers and historians.

There are only four photographs in this book, cannon and other museum artifacts.  They are color and of high quality.  Reproductions of artwork and line art show what we missed due to the the lack of photography in the 16th century.

A.    Yacht & Spritsail: two color profiles with a silhouette of a man for scale.

B.    Two-page cutaway: William Barentsz’ Yacht of 60dwt with three masts, keyed to 34 components.  A detailed description included in a callout box.

C.    Hollandse Tuin: color profile with a silhouette of a man for scale.

D.    Galleys: two color profiles with a silhouette of a man for scale.

Each illustration includes a silhouette of a man for scale.

1.     Map: Chronology of the Netherlands During the 80 Years' War, keyed to three dozen events.

3.    Table: Overview of Important Dutch Flagships of the 80 Years’ War by:

That visual information strongly supports the text and I believe will be appreciated by modelers.

Dutch Navies of the 80 Years' War 1568–1648 is a detailed text that provides a great deal of interesting material. The supporting photos, artwork and graphics enrich the text and it is another good history/reference from Osprey.  Forty-eight pages certainly cannot offer a comprehensive history of this subject, nor does this overview attempt to. As such, I have no meaningful complaint about the text.

This book is a good informative concise volume for modelers, students and enthusiasts of the forging of Holland through her navies.  Recommended.

Please remember to mention to vendors and retailers that you saw this book here - on Model Shipwrights. 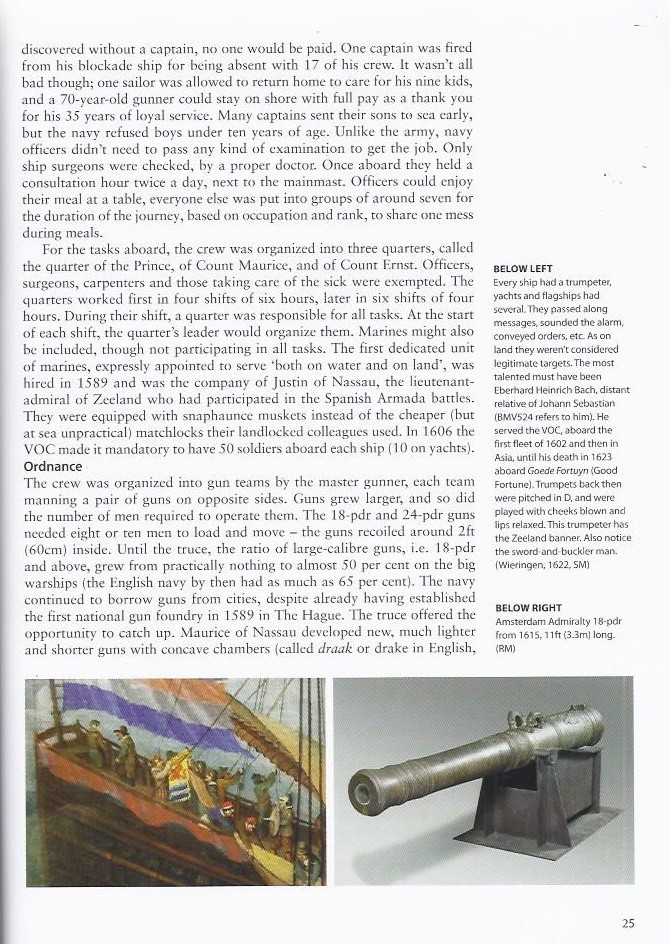 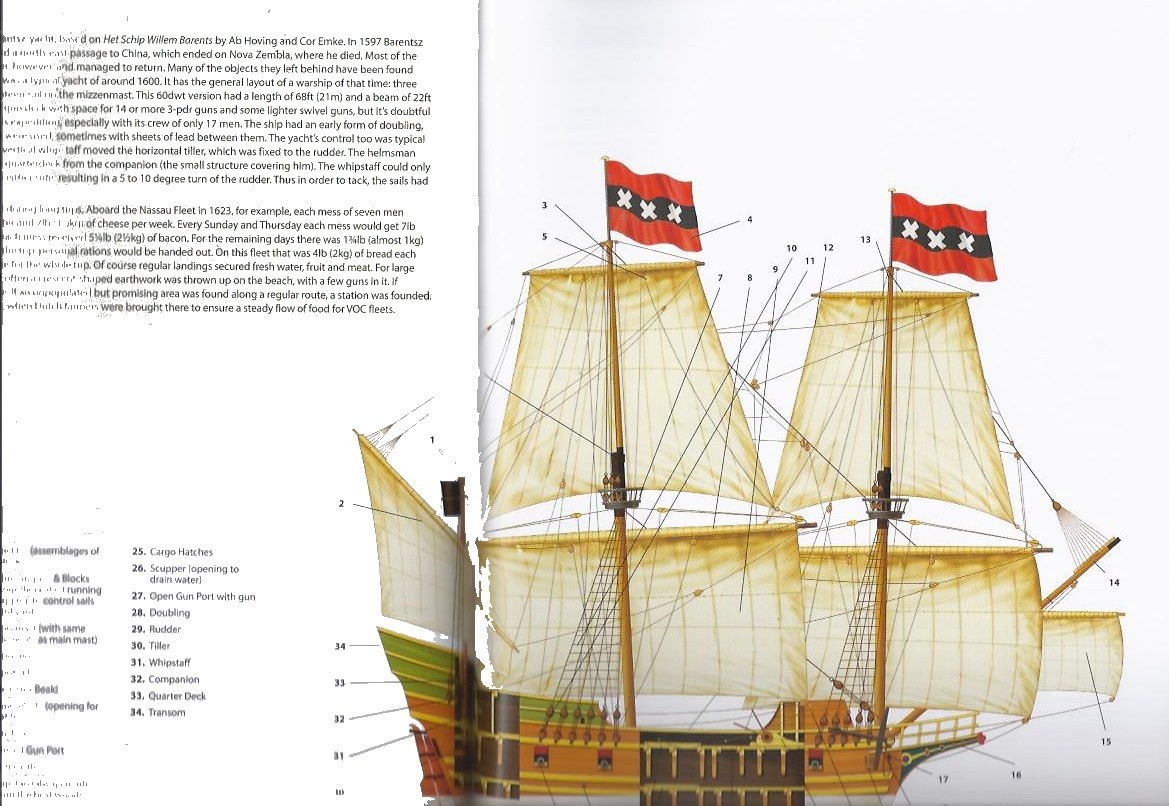 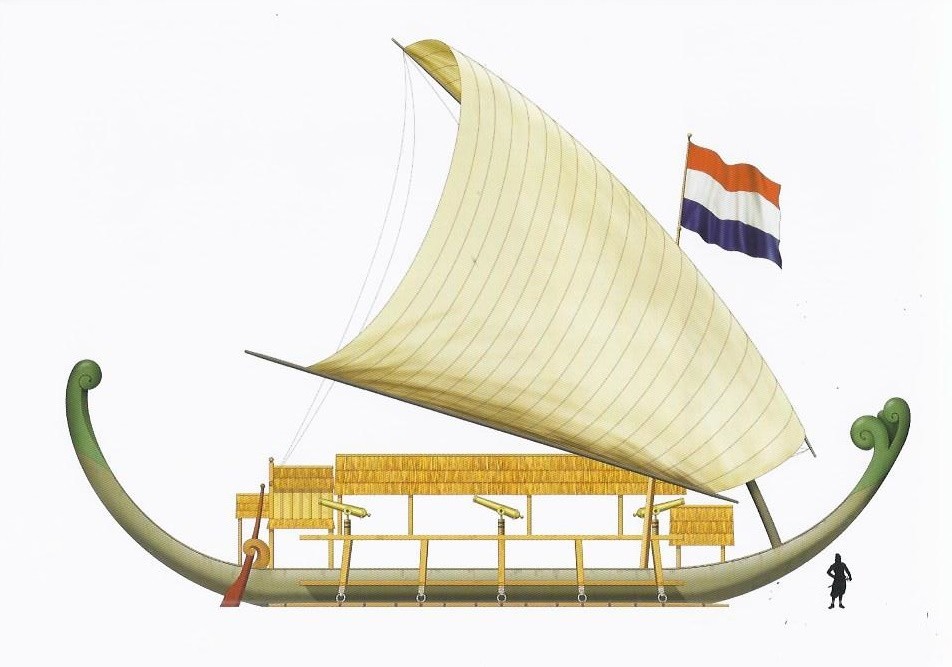 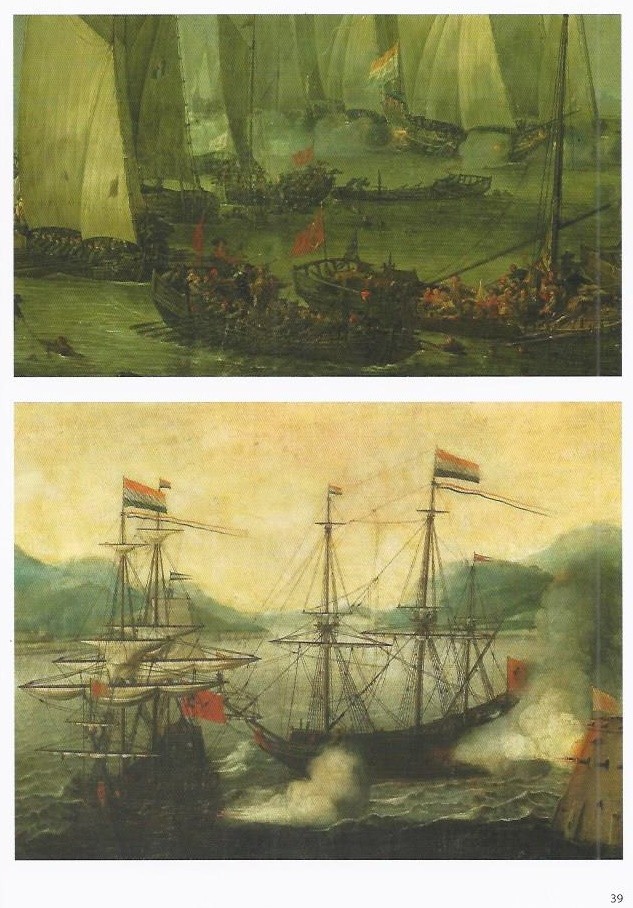