JPTRR
Editor
posted on 1 year ago
1,558
views
Osprey Publishing LTD has released US Navy Gunboats1885–1945, their 293rd title of the series New Vanguard. It is the fourth gunboat book in that series, released yesterday, 15 Apr 2021. 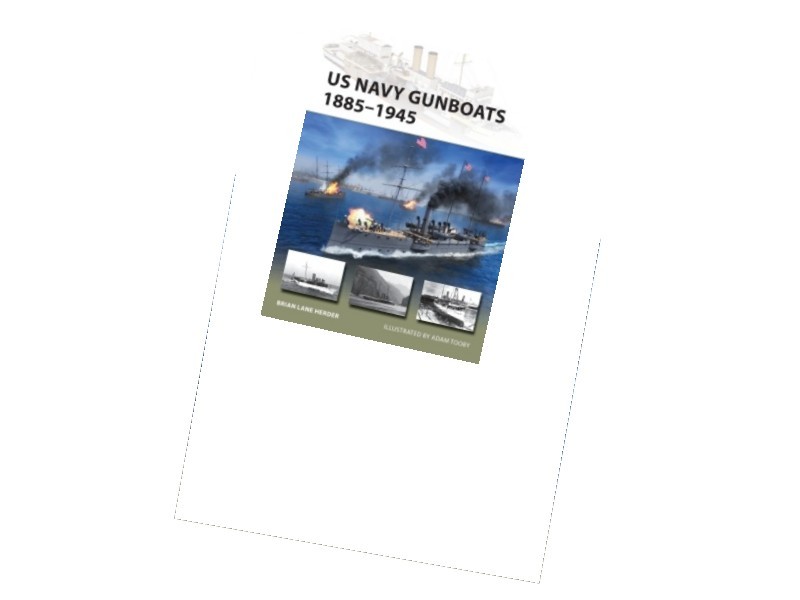 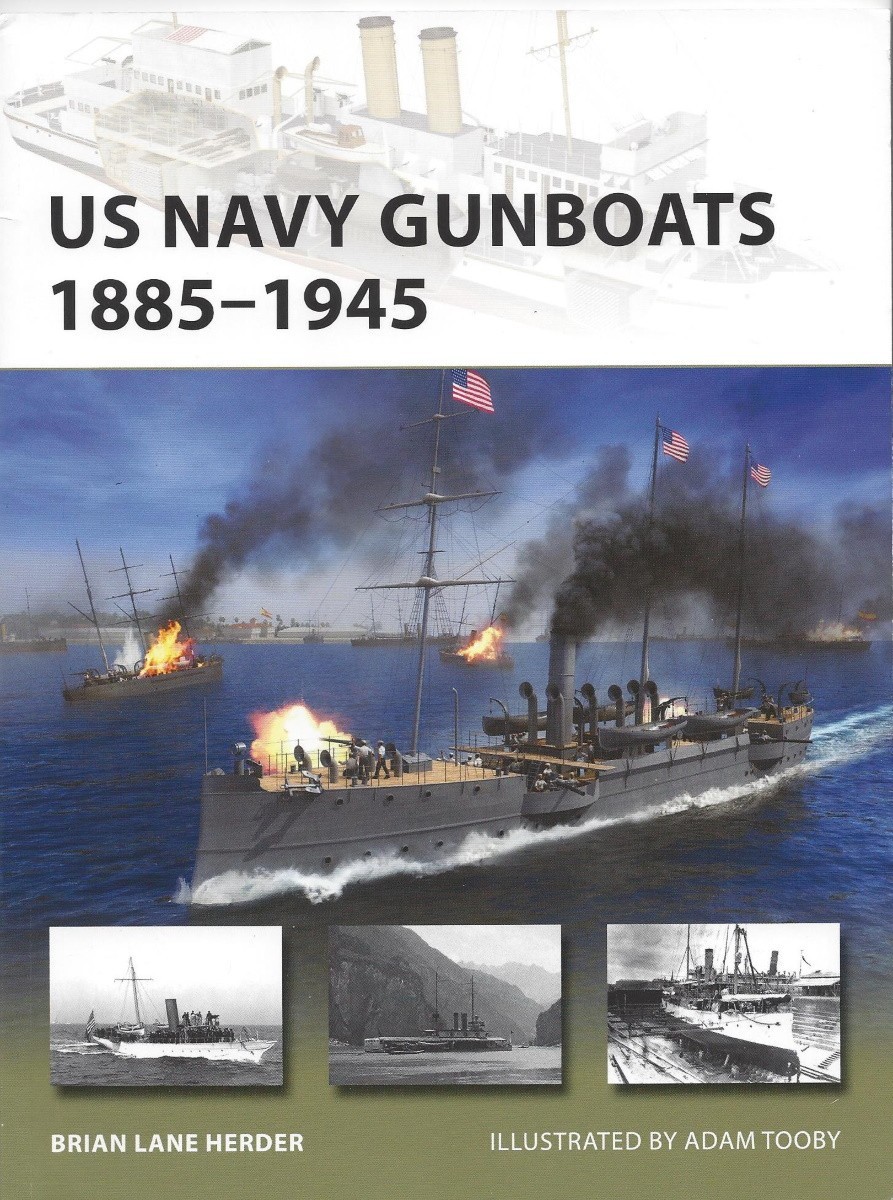 US Navy Gunboats 1885–1945 is produced by Osprey Publishing LTD in softcover, PDF, and ePUB.  Authored by Brian Lane Herder and illustrated by Adam Tooby, it is catalogued with the Osprey short code NVG293 and as IBSN 9781472844705.

Gunboats are an interesting subject to me as one of my favorite movies is The Sand Pebbles, about an American gunboat in China.  China gunboats have a distant personal connection - my dad escaped Java aboard USS Isabel after his ship, USS Houston, was sunk; he served on Isabel until VJ Day.    USS Isabel was a "China boat," and this book shows a lot of USN boats in China service.  I am still fascinated by these ships which "punched above their weight."  Osprey’s description of this book follows:

For more than half a century, American gunboats were the ships often responsible for policing small crises and provided deterrence and fast-response capabilities around the world - showing the flag, landing armed parties, patrolling river and littoral areas, and protecting ex-pats.  They were often the United States' most-visible and constant military presence in far-flung foreign lands, and were most closely associated with the Far East, particularly the Philippines and China.  Most famous, of course, was the multinational Yangtze Patrol.

Many US gunboats were built, purchased, or reassembled overseas,  where they usually served out their entire careers, never coming within 7,000 miles of the national homeland which they served. Numerous gunboats were captured from the Spanish during the 1898 war, many being raised from shallow graves, refurbished, and commissioned into USN service.

The classic haunt of US gunboats was the Asiatic Station of China and the Philippines. Gunboat service overseas was typically exotic and the sailors' lives were often exciting and unpredictable. The major operational theaters associated with the US gunboats were the pre-1898 cruises and patrols of the earliest steel gunboats, the Spanish-American War of 1898 (both the Philippines and the Caribbean), the guerilla wars of the early 20th century Philippines and Latin America, the Asiatic Fleet and Yangtze Patrol of the 1890s-1930s, and finally World War II, which largely entailed operations in China, the Philippines, the Dutch East Indies, Alaska, and on convoy routes. It was Japan's sudden 1941-1942 "Centrifugal Offensive” that effectively spelled the beginning of the end not just of most American gunboats, but also the century-old world order in Asia that had provided US gunboats their primary mission.

Osprey’s other three gunboat titles are:

Gunboats of World War I 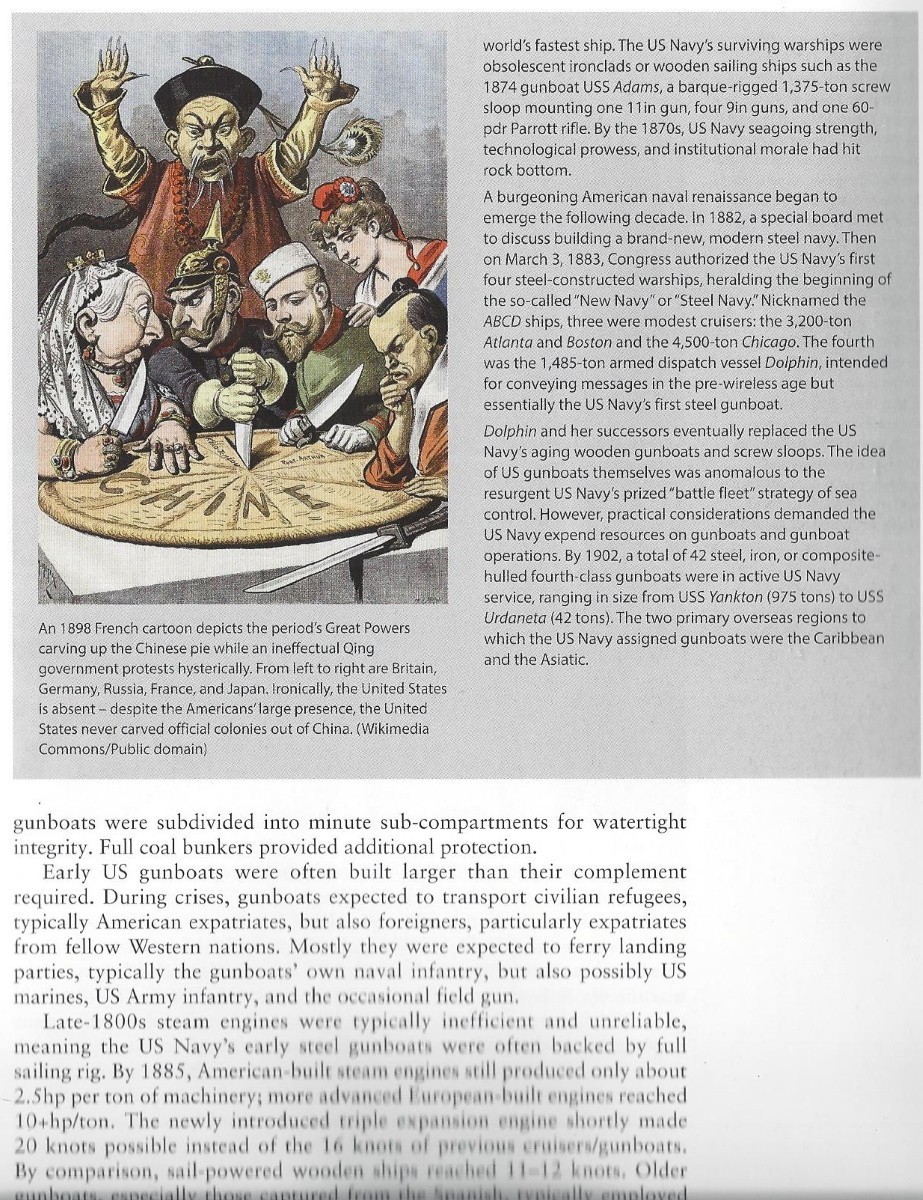 New Vanguard books are generally basic surveys of the title subject, limited to 48 pages.  Between the covers the topics covered are:

Sometimes the table of content varies between the website and the printed page but the subject matter stays the same.  The book layout insides sidebars and text boxes.  Five pages introduces the purpose and mission of the gunboat in the United States Navy from 1843, through the American Civil War, into World War II.  I found it interesting how the Navy acquired many of them.

Gunboats and its subsections provides 20 pages exploring the concepts, designs, designations, and other aspects of bringing these ship into service.  An developing revolution of warfare is illuminated in that a class of "China Boats" were armed with anti-aircraft guns, not only to fire upon pirates and bandits on the high Yangtze bluffs, but also for 'expected warlord air attacks.'   That sounds like the stuff of 1930s matinees and pulp novels but it is reality.  This chapter also addresses the numerous terms and classifications USN used for their ill-defined definitions of a gunboat (which was touched upon in a previous book).  I found Special flagships 1905-77 amazing in who used these mighty midgets, and for what reason.  Admirals and Presidents extensively used gunboats.

Gunboat participation in the SPANISH-AMERICAN WAR 1898 and BANANA WARS 1899-1916 are covered through eight pages of text and images.   We learn that not all casualties were caused by combat.  Finally, 12 pages of the chapters THE ASIATIC STATION 1899-1937 and ASIA AND THE PACIFIC 1937-42 recount what is perhaps what USN gunboats are best known for, service in Asia.   It not only touches upon the exotic atmosphere of that service, but also the darkest days of USN gunboats, war with the Imperial Japanese Navy (IJN).    I learned a couple of amazing facts in these chapters.   That information along with the gallery of photographs and artwork make this book one for anyone's library.  Readers may also be amazed and even amused to learn the sources from which USN acquired gunboats.

New Vanguard books may be short on pages but they are long on visual content.  I was surprised by the number of original color photographs enriching the content.  Most of the photos are black-and-white.   Although some reach back to the American Civil War with that primitive quality, many are very high quality.  The images run the gamut, from "glamor shots" of ships, equipment and men, to actual in-combat scenes.

Elaborates upon the subject matter and fills the void of what the camera missed.  Some is original for this book, some sourced.  Artist Adam Tooby created a gallery of first-rate color illustrations that enhance the book.

A. USS Yorktown and USS Wilmington in profile: in peacetime white and ocher is  PG-1 Yorktown in 1889 with the Squadron of Evolution (White Squadron); PG-8 Wilmington, Rio de Janeiro, 1899, after navigating 2,300 miles up the Amazon to Peru and back.

The gallery of images are a valuable source for modelers. 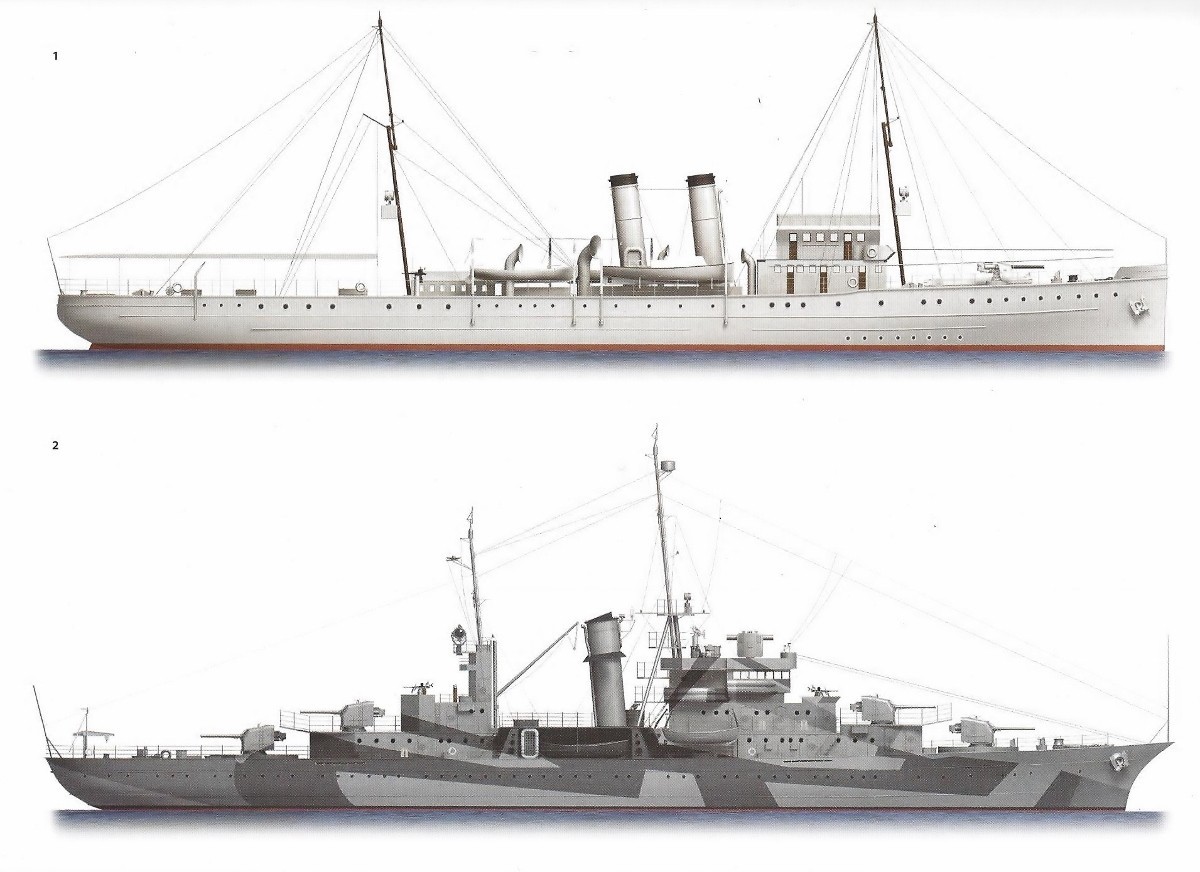 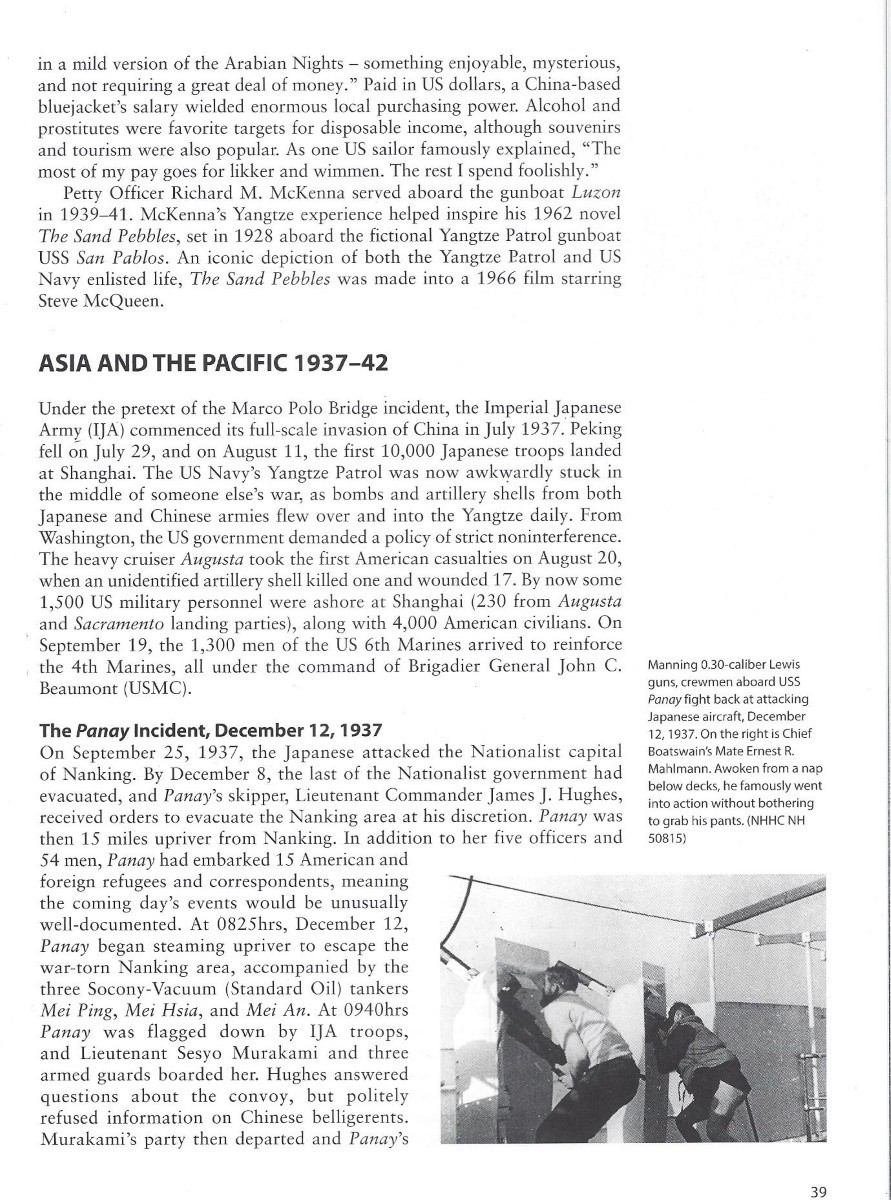 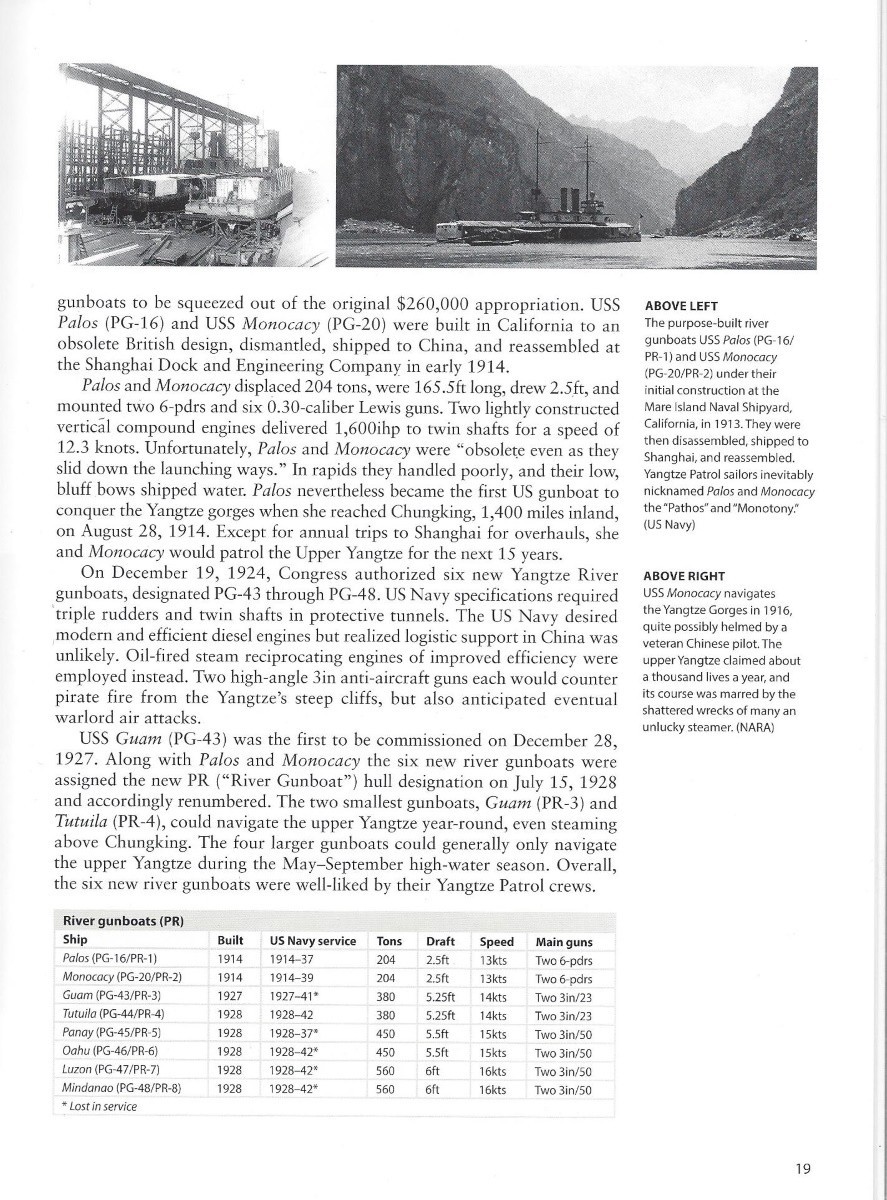 US Navy Gunboats 1885–1945 is another interesting Osprey title examining those bantam battlewagons borne of gunboat diplomacy. Their story should pique the interest of maritime modelers for a unique subject of warships. This book is not an exhaustive history of each ship or class but rather a vignette to whet one's appetite for more.  The text is interesting and easy to read presenting detailed technical descriptions and interesting historical overviews. Artwork is high-quality, as is much of the photographic selection.  I found nothing to complain about this book.

Like the previous gunboat title, I find this book to be a worthy and enjoyable addition to my library's naval section. I happily recommend it to modelers, enthusiasts, artists and historians of gunboats, the Spanish-American War, the Asiatic Squadron, The Great War, World War Two, and small naval vessels.  Happily recommended.

We thank Osprey Publishing for providing this book for review. Please tell them and retailers that you saw this book here - on Model Shipwrights.